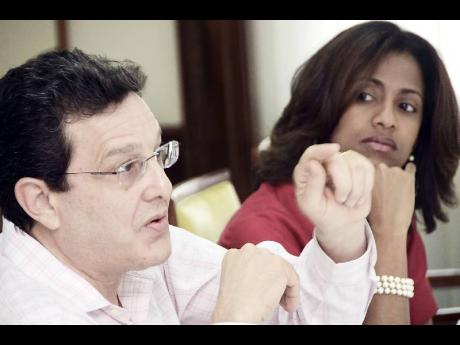 Amid public criticism that several aspects of its tax-reform proposal were anti-poor, the Private Sector Working Group (PSWG) has hit back saying that label would be best applied to the current system of general consumption tax (GCT) exemptions.

Making the argument yesterday, Joseph M. Matalon, chairman of the PSWG, said at the existing rate of 17.5 per cent, the Government is giving up more than $22 billion in revenue that would have been collected on items that are exempt from GCT.

But according to Matalon, the PSWG's proposal has shown that only 11 per cent, or nearly $2.5 billion of that amount, actually reaches the "poorest 20 per cent of the population".

"Whereas, perversely, the top 20 per cent of the population enjoy almost 28 per cent of the benefits of that $22 billion, or some $6.3 billion," he added during a Gleaner Editors' Forum at the newspaper's central Kingston offices.

"I believe the current system of tax exemptions is an anti-poor policy," Matalon declared.

"I agree," Imani Duncan-Price, another member of the PSWG, quickly added.

The PSWG, in its tax-reform proposal that was presented to a special tax committee of Parliament, called for the removal of GCT exemption from several items, including basic foods, and a lowering of the GCT rate from 17.5 to 12.5 per cent.

The group also suggested that additional resources be put into the Programme of Advancement Through Health and Education to assist the most vulnerable in the society.

However, when the special tax committee voted to recommend to Parliament that these items remain exempt from GCT, economist Joseph Cox said it represented a "victory for the poor".

Yesterday, Matalon said his group understood that the exemptions were put in place to provide a benefit to the most vulnerable groups in the society and conceded that it was having an impact.

However, he questioned whether the manner in which these exemptions were being provided was still "justifiable".

"Can we justify spending $22.6 billion to provide $2.5 billion of benefits to the poorest 20 per cent of the population. I personally don't think so," he argued.

"That is why we proposed that the exemptions be eliminated, that the rate be reduced and that the additional revenues that are generated from that measure be allocated for directly targeted social expenditures that benefit those whom the policy was originally intended to benefit," he said.

The PSWG chairman said he and members of his team went "into the trenches" to get a first-hand look at some of the social programmes being offered by the state and were surprised with what they saw.

As an example, he said the PSWG found that the school-feeding programme had three different elements, but pointed out in each case only a paltry amount was given to each recipient.

"The level of indignity that PATH participants are put to in that process ... where they have a different colour ticket in some schools, where they have to stand in a different line, where when they get that lunch, it is of a lower quality than the rest of the population," he lamented.

"If we are serious about our people, we need to deal with that."