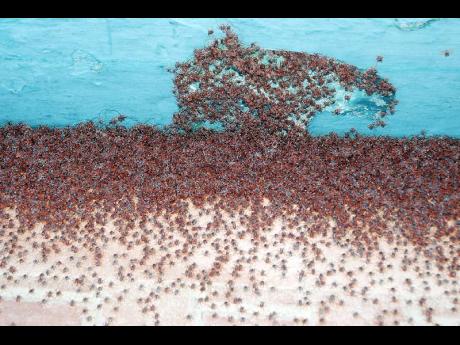 A crab invasion in St Mary, Hanover and Negril is being blamed on structural development along the country's coastline.

Since May 5, millions of spider-looking baby crabs have been invading the seven-mile Negril beach, sections of the coast in Hanover, and Boscobel in St Mary, the National Environment and Planning Agency (NEPA) has confirmed.

"For Negril, in particular, the crabs have been trying to get from the sea to their natural habitat, which is the wetlands across the street from the hotels," NEPA's wildlife biologist and enforcement manager, Richard Nelson, told The Gleaner.

Although a seasonal event for crabs to multiply in the thousands, Nelson estimates that the phenomenon being witnessed on the Negril beach is a "cyclical event". Even more worrying is the fact that the wildlife biologist feels this is an indication of the impact of the consequences of development.

"We refer to these animals as indicator species. There may be an environmental problem," he explained.

His suggestion has been backed by Brian Sang, area chair of the Jamaica Hotel and Tourist Association (JHTA), Negril Chapter. Sang said hoteliers woke up two weeks ago to find the beach invaded. "It seemed as if their natural habitat had been disturbed and they were confused."

Sang said before the highway was built, the crabs could have walked from the ocean, where their mothers laid their eggs, into the morass.

Together, Sang and his team has been setting traps, such as fish nets and bags for the crustaceans which are then released into the morass.

Nelson is of the opinion that if construction on the coastline is to continue, the country might have to reserve an area for animals such as crabs to make their way to their habitats without having to be killed by traffic on the streets.