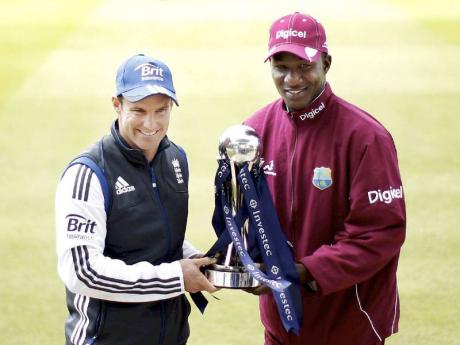 England's captain Andrew Strauss (left) and West Indies captain Darren Sammy pose with the Test series trophy backdropped by the pitch and pavilion at Lord's cricket ground in London yesterday. England are due to play West Indies in the first day of a Test match at Lord's today. - AP

Embattled West Indies enter the opening Test against world number one England at Lord's today, facing an avalanche of criticism over a novice top order, patchy preparation and a recent record that has seen them win just one series over top-ranked opposition in three years.

The British media has been as ruthless as it has been calculated in its assault on the Caribbean side's chances in the three-Test series, and pundits here have held out little hope for the Windies against what appears to be a daunting England side in familiar conditions.

Entering the series after a 2-0 defeat to Australia - the latest in a long sequence of defeats - West Indies have been dogged by the late arrival of players, damp, chilly weather which ruined their opening tour match against Sussex, and erratic form which resulted in a 10-wicket defeat to England Lions last weekend.

All these factors have combined to leave the Windies as definite underdogs, but captain Darren Sammy upheld faith in his side to compete strongly despite the nature of the challenge.

"This young team has shown the kind of character and attitude that shows signs we could compete, and we've been competing against top-ranked teams. It's about getting victories under our belts, and that is something that will come when we play more together and believe more in ourselves," Sammy told a media conference.

West Indies are seeking to overturn a dire record against the hosts in recent years, where they have won just two of the last 24 Tests played, while losing 15.

When the tourists were last here three years ago, they were demolished in the two-Test series - losing the first at Lord's by 10 wickets inside three days and the second at Chester-le-Street by an innings.

England have suffered in recent months, however, whitewashed 3-0 by Pakistan and struggling to a 1-1 draw with Sri Lanka on the Asian subcontinent, but Sammy said he did not see this as a sign of weakness.

"They are number one and we expected them to play like world champions," Sammy asserted.

The Windies enter the match with a green top order that boasts 41 Tests among them, none of them in English conditions.

And while 22-year-old left-handed opener Kieran Powell got a century at Northampton against Lions, and Bravo picked up half-centuries in either innings, question marks still remain, especially against a more experienced England seam attack.

"Seeing off the new ball is very important. In County cricket, batsmen have been having trying times to see off the new ball, so asking our youngsters to do that is going to pose a challenge against Anderson and (Stuart) Broad and these guys," Sammy acknowledged.

"They're young, everybody is still learning on the job, so we accept that sometimes these guys will make mistakes but it's how quickly you learn. Hopefully, this Test match could be the turning point."

The worry which abounded over the fitness of the Windies pace attack seems to have subsided, with Sammy expecting all the players to be available for selection.

England captain Andrew Strauss said his side was eager to face West Indies, but stressed it would be dangerous to take the tourists for granted.

"You only have to look at the way the West Indies have played recently to know that they're a match for most sides," he said.

"But we're looking forward to the chance to prove ourselves again, which is what you've always got to do in international cricket.

"The first Test of a summer is always exciting, and we just cannot wait to get out there and play."