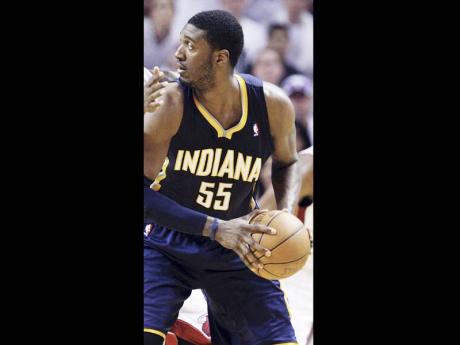 "He (Hibbert's agent) said they were grateful to us for having him playing with our team because he has a shot at playing with Team USA, and so they would like JaBA to release him from the national team," said Williams during an interview with The Gleaner yesterday.

However, there are some compliance issues that have to be worked out with USA Basketball and the world governing body FIBA.

"The United States Federation would need to write us and state that they want this player, and at that point JaBA can speak directly to the federation and FIBA, based on the player transferring from one national team to another," Williams said.

One of the top centres

The 7ft 2in, 278-pound Hibbert who is currently representing Indiana Pacers in the Eastern Conference semi-finals in the NBA play-offs, against the Miami Heat, has emerged as one of the top centres in the league this season.

He averaged 12 points and eight rebounds during the regular season.

Hibbert last represented Jamaica in the Centro Basketball Tournament in the Dominican Republic in 2010.

Williams added that his association has invested a lot in Hibbert, and therefore they will be seeking compensation for his release.

"JaBA just can't just release him because there was a cost that goes into getting Roy Hibbert. We paid a lot of money for NBA insurance for him," Williams said.

"We also did a lot of things around him, and so there are going to be several considerations before JaBA releases him," he added.

Williams stated that Hibbert's absence would be a big blow for the national team, which is scheduled to participate in the Central American Basketball Championships next month.

"We would do much better with him, but the good news is that we have a lot of big men like Jerome Jordan, who could have come off the bench behind Roy," he said.