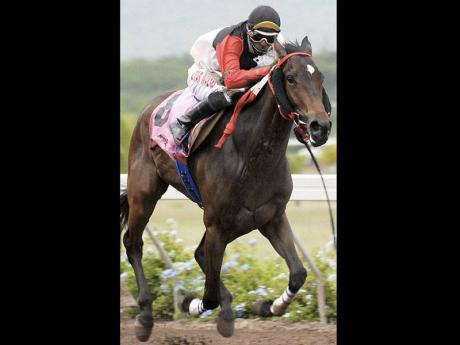 As racing resumed at Caymanas Park yesterday following Saturday's shutdown, EMPEROR HALL scored an emphatic victory in the 3-y-o and up open allowance race over 1820 metres to complete a double for jockey Shane Ellis.

But while 4-5 favourite EMPEROR HALL truly impressed on this his first outing since Boxing Day, leading Derby contender, UNCLE DONNY, the recent 2000 Guineas winner, gained kudos for his performance in finishing third at this level.

Ridden by champion jockey Dick Cardenas for trainer Anthony 'Baba' Nunes, the 3-y-o grey colt raced prominently to straighten a clear third and was only outfinished by DON GEORGE in the last 100 metres for second.

Significantly, both UNCLE DONNY and DON GEORGE race in similar black and yellow silks of Oakridge Farms, but are conditioned by different trainers.

Despite having to carry as much as 55.0kg, UNCLE DONNY was allowed to take his chances against older horses for his Derby prep, bypassing the $3.3 million Lotto Classic (Governor's Cup) over 2000 metres to be run on Saturday.

In contrast, yesterday's race offered a purse of $786,500, and while the logic of running UNCLE DONNY in open allowance company so soon was not all visible, the experience could prove invaluable when he faces his peers in the June 9 Jamaica Derby.

Meanwhile, EMPEROR HALL won by all of nine lengths from DON GEORGE and UNCLE DONNY another length away in a field of 10.

Stepping down in class with topweght of 57.0kg., the American 4-y-o colt from the stables of Noel Ennevor was ridden to challenge long-time leader REASONABLE PRESS (even-money) from the half-mile and surged through on the outside leaving the 600-metre pole. Thereafter, it was smooth sailing as he moved farther and farther away.

With the licensed bookmakers again refusing to sell bets on local racing over a rights fees impasse with CTL, the 10-race programme produced a handle of $28.3 million - satisfactory numbers according to the company's CEO, Franz Jobson.