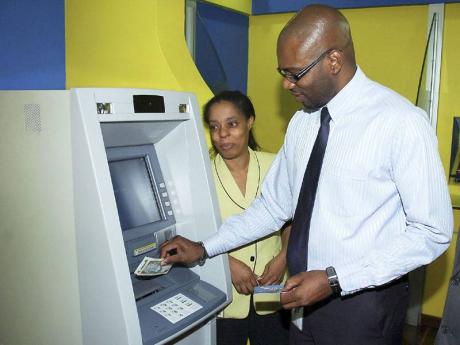 Orett Douglas, senior branch manager of the JNBS Half-Way Tree branch, feeds money into the cash-accepting and recycling ATM to demonstrate how it works. Beside him is Shereen Jones, executive, information technology at the JN Group. Contributed

The technology is also said to be sensitive enough to detect counterfeit bills.

The machine, said to be the first of its kind in the Caribbean, was put into operation in March at the new JN Financial Services Centre at Catherine Hall in Montego Bay, and another was installed later at the JN branch in Half-Way Tree, Kingston.

MC Systems is a sudsidiary of Jamaica National Building Society, specialising in information technology. JN said the cash-recognition technology allows customers to do their banking at any time using the machines - including depositing cash by feeding the notes directly into the ATM.

The machine is made by Diebold Inc. JN said in a release that MC Systems sells Diebold's ATMs and provide support services for the machines in Jamaica and the Caribbean.

Dianne Smith-Sears, general manager of MC Systems, declined to discuss the price of the new ATMs, but said: "Obviously, it will cost more because of additional technology in the machine ...".

Smith-Sears said the machine - which is described as a 'cash recycler' - will change the way the financial sector does business.

"In addition to the convenience of being able to withdraw cash at any time, the user will experience the same ease in making cash lodgements to their accounts. The machines will accept the notes directly - instead of notes in an envelope - and will count and request verification of the total lodgement. The account balance is immediately updated and the amount made available for their use," said Smith-Sears in the JN release.

"I should also add that the ATM will recognise counterfeit notes," she said.

But Smith-Sears was equally vague on describing how that part of the technology works when asked by the Financial Gleaner to explain it, saying only that the technology is "built in".

The machine is referred to as a recycler because it reissues the cash deposited into the ATM.

Eddy Carrioni, sales support & product marketing manager for Diebold, says MCS has "brought a worldwide trend into the Caribbean". He also presented MC Systems with an award from Diebold for being the first company to introduce the cash recycler.

So far, only Jamaica National has installed the machines.

"However, MC Systems will be introducing the ATM to its clients in Jamaica and the rest of the Caribbean," Smith-Sears told the Financial Gleaner.