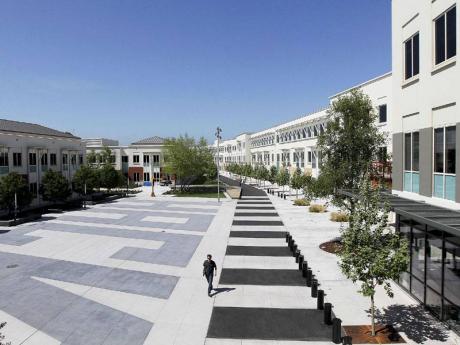 The Facebook campus is shown in Menlo Park, California, Friday, May 11. The company Mark Zuckerberg created as a Harvard student eight years ago is preparing for what looks to be the biggest Internet IPO ever. - AP

Insiders and early Facebook investors are taking advantage of increasing investor demand and selling more of their stock in the company's initial public offering, the company said.

Facebook said Wednesday in a regulatory filing that 84 million shares, worth up to US$3.2 billion, are being added to what's shaping up to be the decade's hottest IPO.

Facebook's stock is expected to begin trading on the Nasdaq stock market on Friday under the ticker symbol "FB".

The entire increase comes from insiders and early investors, so the company won't benefit from the additional sales.

The biggest increases come from investment firms DST Global and Tiger Global. Goldman Sachs is doubling the number of shares it is selling. Facebook board members Peter Thiel and James Breyer are also selling more shares.

The news comes a day after Facebook raised the expected price of the stock to a range of US$34 to US$38 per share, up from its previous range of US$28 to US$35.

Late Thursday, Facebook announced that it had priced the stock at US$38 per share. It means investor demand is strong for the world's largest online social network.

Facebook now stands to reap as much as US$18.4 billion from the IPO, if the extra shares reserved to cover additional demand are sold too. The offering values the company at around US$104 billion.

The IPO is the most anticipated in years and would value Facebook overall at more than US$100 billion.

The offering was expected to get a final price Thursday evening.

In a filing with the Securities and Exchange Commission, Facebook said current shareholders are now offering approximately 241 million shares, up from about 157 million shares previously.

Even though Zuckerberg isn't increasing the number of shares he is selling, the additional sales will trim his voting control to 55.8 per cent from 57.3 per cent. That's because he has voting control over some shares now owned by investment firms, which will be sold in the offering.

The run-up to Facebook's IPO occurs as companies debate the effectiveness of Facebook as an advertising platform. That examination sharpened Tuesday, when General Motors Company, the nation's largest automaker, said it would stop advertising on Facebook.

At the same time, however, GM competitor Ford Motor Company reaffirmed its commitment to Facebook, saying on Tuesday that its relationship was stronger than ever.

Facebook has more than 900 million users who log in at least once a month, but it makes only a few dollars per year from each one, chiefly through advertising. Advertisers have been complaining that it's difficult to make good use of Facebook.

A person briefed on GM's advertising said the company will stop running paid advertising on Facebook by mid-summer because advertising agencies and third-party companies that reviewed the ads determined the company wasn't getting much back for its US$10 million in annual spending.

The person, who asked not to be identified because GM's ad strategy is private, said the Facebook ads didn't generate much in the way of action by consumers to consider GM products.

GM will, however, maintain Facebook pages for all of its brands and models. These are popular and do generate consideration of its products, the person said. But they don't generate revenue for Facebook.

GM spends about US$30 million a year creating content such as pictures and videos to post on the pages, the person said.

More than 3.1 million people on Facebook "like" two pages dedicated to the Camaro muscle car, and 1.2 million "like" the Chevrolet brand. GM also has brand pages for individual countries. For instance, Chevrolet Egypt gets almost 200,000 "likes".

GM said that it constantly reviews whether its advertising in all media reaches the right age and income demographics. It could reconsider Facebook ads later in the year, the person said.

GM's advertising spending is a tiny fraction of Facebook's 2011 advertising revenue of US$3.15 billion. But it could be symptomatic of Facebook's weak appeal to advertisers. Its chief conduit to reach users is through so-called 'display ads' - boxes that show up on the right hand of Facebook's page. They're tuned to users' interests and activities, but they don't connect as well as Google Inc's search-based ads.