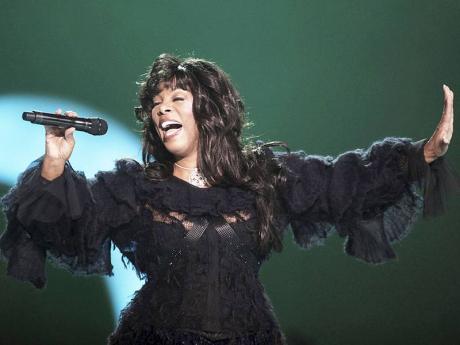 In this December 11, 2009 file photo, Donna Summer performs at the conclusion of the Nobel Peace concert in Oslo, Norway. - Contributed

Donna Summer has died at the age of 63.

The Last Dance singer passed away yesterday morning in Florida after a battle with cancer.

According to gossip website TMZ, the Queen of Disco had attempted to keep the extent of her illness from fans and was recently trying to finish up her latest album. Donna was a five-time Grammy Award winner and the first artiste to have three consecutive double albums reach number one on the US Billboard chart.

She also charted four number-one singles in the United States within a 13-month period.

Donna, who was born LaDonna Adrian Gaines in 1948, married actor Helmuth Sommer in 1973 before giving birth to the couple's daughter Mimi later that year.

Although the marriage crumbled in 1975, she kept an altered version of her ex's surname to use as her stage name. She married Brooklyn Dreams musician Bruce Sudano in 1980 and the couple went on to have two daughters, Brooklyn, born in 1981, and Amanda the following year.

In 1994, the family moved from Los Angeles to Nashville where Donna took time out from show business to focus on painting, but had recently returned to the recording studio.