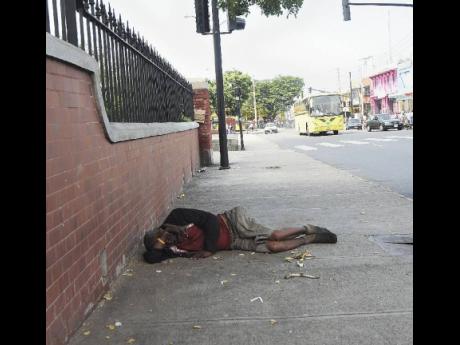 A homeless man sleeps on the sidewalk at St William Grant Park in downtown Kingston. - photos by Ian Allen/Photographer 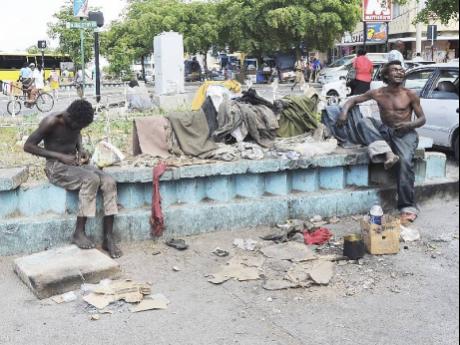 These two homeless men have no qualms about making this area directly in front of the Ward Theatre their home. 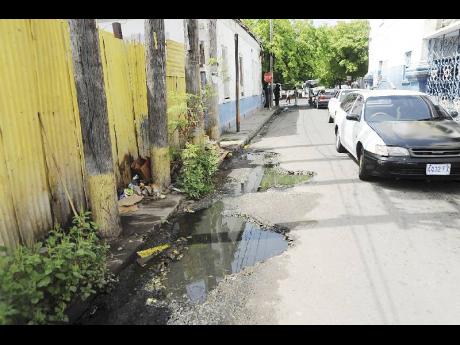 Taxi men say when it rains heavily, this lane next to the Ward Theatre, downtown Kingston, is inundated with dirty water and even sewage. 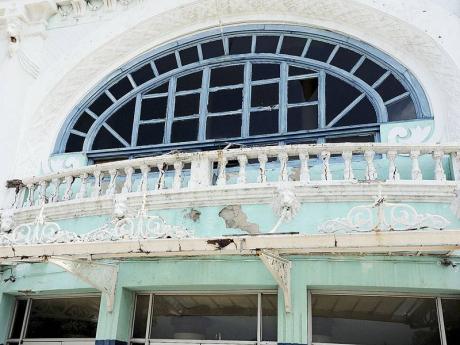 The terrace at the Ward Theatre is badly in need of repair.
1
2
3
4

Town Clerk Errol Greene explained that both sites were the joint parish project for Kingston and part of a wider, massive clean-up of downtown. The cleaning initiative is part of plans to celebrate the 140th anniversary of the city of Kingston. Greene admitted that the historic park was in a bad state.

"The park smells like a latrine," he said, frankly. "It's a pity you can't show the stench in your photographs."

He said the park would be given a thorough washing, including the walls which, despite the presence of bathrooms, are still being used as urinals.

Outside the park, evidence of the urine issue was clear. Long and wide streaks of the waste-stained corner columns. At times, the stench was unbearable, especially for pedestrians who covered their noses and watched their step very carefully. Even inside the park, there were pools of stagnant water around grassy areas. At one area, almost directly in front of the Ward Theatre, there appeared to also be other body waste present. The only persons seemingly unperturbed by the smell were the several homeless individuals using the location for shade.

"We are also going to be building a proper garbage bay, and doing some painting," Greene explained. He said the Ward Theatre would also be painted, noting that the outside was badly flaking.

"There is some ironwork that needs sorting out as well. Plus, the vagrants sleep in front of it and there is always water running down," he said. As The Gleaner approached the famous theatre, a pedestrian was chastising a hobo for making his home there.

"Move from yah so, no man!" he exclaimed.

"Walk some whe else den!" the vagrant replied immediately.

Some of the water of which Greene spoke lay stagnant in pools along Love Lane, right beside the theatre. The taxi men and loaders who use the lane and other areas close to the Ward were happy to see The Gleaner so they could air their grouse.

"Whenever they dredge up the top, it flows down here and it blocks up," said Soljie, a taxi man. He and others pointed out that the drains where the water should run through are blocked with garbage and weren't big enough to begin with.

"One time the sewage overflowed in front of the Ward and there were tourists there taking pictures. It was a disgrace," he said. The men weren't impressed that the Ward was part of the Labour Day project.

"This (pointing to the Ward) should be a national heritage site. Lots of foreign dignitaries come here. They should be doing it separate, not just on Labour Day," one said.

Both projects will start in Labour Week. But Greene said there were long-term plans for both places and the wider Kingston area.

"I can assure you, we are putting plans in place," he said, referring to long-time issues of removing the homeless and managing the street vendors.