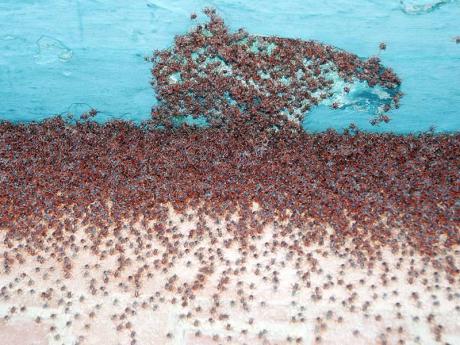 Jamaica is not the only Caribbean island experiencing an influx of millions of crabs. One of its closest neighbours, Cayman Brac, is also reporting the phenomenon.

A report by the Caymanian Compass yesterday stated that, like Westmoreland, Hanover and St Mary in Jamaica, parishes that are being overrun by the creatures, they too have been seeing an invasion of land crabs throughout their island.

However, unlike Jamaica's case where the National Environment and Planning Agency (NEPA) feels structural development has played a part in causing the crabs difficulty in reaching their natural habitat, some Caymanians believe a hurricane could be in the works.

In fact, they have tagged the crabs 'Hurricane Crabs' because of a superstition that they are portents of a bad hurricane season.

District commissioner of Cayman Brac, Ernie Scott, was quoted in the Cayman Compass saying there were "hundreds of thousands of the little critters" and that when they appear, they usually stick around for about two weeks.

"There's a very strong feeling on the island that they relate to the arrival of a hurricane," said Scott.