Teachers' association has too much teeth - Thompson 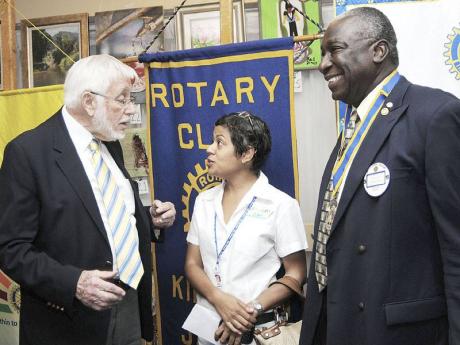 Veteran educator Dr Ralph Thompson feels it is time to "defang" the Jamaica Teachers' Association (JTA), describing it as "a militant trade union with great power".

Thompson was addressing the Rotary Club of Kingston yesterday and, though his presentation focused on early-childhood education, he made room for criticising aspects of the teaching profession he felt were lagging.

Thompson readily admitted there were many good teachers in Jamaica but felt that the JTA had been protecting the bad ones.

"School boards which now hire teachers directly should also have the power to fire them for non-performance. You can't touch a teacher without going to the Ministry of Education and when you go to the ministry ... the spectre of the teachers' association is hanging over the minister like the sword of Damocles," he said.

He opined that more focus was needed on the upgraded high schools since 70 per cent of the school population goes to such institutions.

"It should be clear that nearly all of the weaknesses in the primary and secondary sectors of the education chain originate in the failure to lay a sound foundation at the early-childhood level."

He cited that children learn more in the first six years of life than any other time, and that brainpower with which the child is born must be stimulated or the synapses will deteriorate.

"It is a case of use or lose. Remedial attempts at later stages in the education chain have very little success and are not cost-effective," he said.

He lamented that even today, a third of the approximately 2,600 early-childhood schools in Jamaica still have pit latrines. He called for Rotarians to make early-childhood education a priority by adopting basic schools and supplementing the salaries of early-childhood teachers.