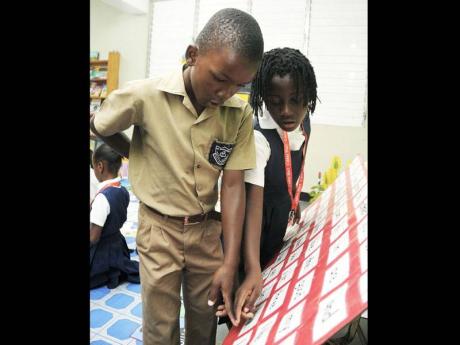 Literacy coordinator at the school, Juliet Campbell, explained that the school had to improve its reputation.

"We have been a school that people have considered a 'slow' school, so we want to show people that after assessing our situation, looking at all the problems we have, we came up with a lot of different things we can do to bring up the children," she said. The school had a literacy rate of just 29 per cent in 2008 and has doubled that to 58 per cent, so they wanted to show visitors how they were improving.

The strategies included the use of technology like the AlphaSmart word processor and literacy games. Grade Three teacher, Camecia Vassell, explained a few of the latter:

"They have games like Word Bingo, which is just like the regular Bingo but with words instead of letters and numbers," she explained. The students also use the Spelling Train, which gets them to form lists of words, each new word starting with the last letter of the previous one. The Word Wall, in the school's library, is refreshed often, giving the students new words to add to their vocabulary.

She added: "Another fun activity was the Fishing Box in which students use a 'fishing pole' to pick up a word, and then have to use it in a sentence. Overall, the goal is for students to first recognise the word outside a class setting, and then gradually make it a staple in their everyday speech."

The expo also served to remind people that St Michael's exists. Being on the same street as a correctional facility doesn't help the school's popularity.

"We are extremely happy and feel proud. We want people to know. Many people don't know about us because we are at the 'prison back'. They don't know we exist. We know that there are very good teachers here, and if we weren't here, you know what would happen to these children in the inner city with no one to help them."

On Literacy Day, St Michael's opened its doors to other schools so that they could share best practices.

"We know that other schools have the same problems, we were having then, so we want to showcase some of what we did, and are still doing, to improve our children." The visiting students were encouraged to go around to different workstations and participate in games that St Michael's has been using.

Though happy with the school's progress, Campbell is aware there is more work to be done. She said the literacy expo would become a regular event.