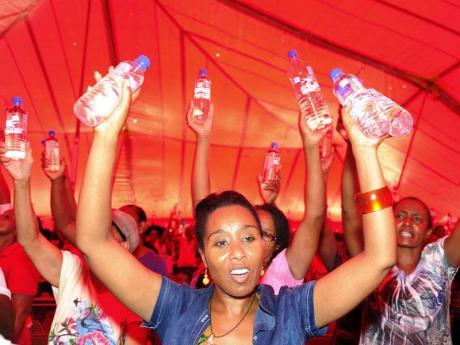 A section of the congregation which turned out for the fasting and prayer service on Wednesday on East Queen Street, central Kingston. - Norman Grindley/Chief Photographer 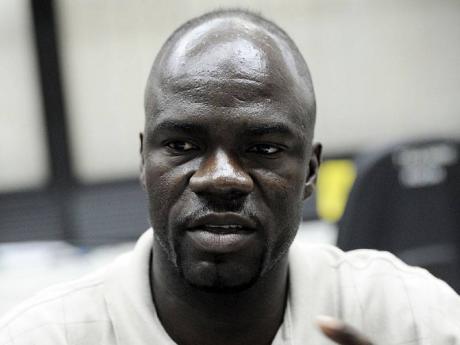 Prompted by economic hardship and other issues, hundreds of persons crammed under a big, red tent in the hotbed of Southside, central Kingston, on Wednesday, and screamed their hearts out as they sought divine intervention for their problems.

It was another Wednesday of 'fasting and prayers', and one by one, they raised their bottles of water to the heavens as the Reverend Mark Stewart, who was at the makeshift altar, prayed and encouraged the believers to "drink in faith and God will address your problems".

Shouts of "Jesus!", "Hallelujah!" and "Praise the Lord!" interrupted the midday sermon that was being preached by Stewart, who says he is on an islandwide, evangelical mission, hoping to win at least 5,000 souls for the Lord by year end.

"Since April 29, we have baptised, so far, 64 persons who have attended our crusade under the big, red tent in Southside. Currently, we are working alongside and preparing 300 others for baptism," the 37-year-old evangelist told The Gleaner.

Stewart, pastor of the Davyton United Church in Manchester, which is affiliated with the United Church of Jamaica and the Cayman Islands, said he was convinced that the Church could reclaim the city of Kingston from the hands of criminals.

"I have never seen so many people thirsty for the Word of God. They are turning out in large numbers and coming to the altar in tears. I believe some are just tired of the life they have been living," said Stewart.

He explained that the attendees were not only from the adjoining communities, but had travelled from far, after learning about the 'Deliverance Breakthrough' crusade.

"Some have issues in their relationships, and we have been providing counselling and offering to marry them free of cost," said the Trelawny-born pastor.

"Since some of them have been baptised, they look transformed, so different," he stressed.