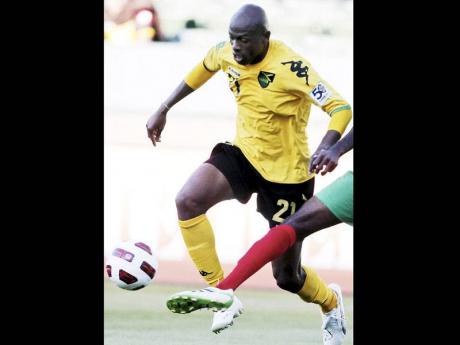 Top forward Luton Shelton ... should be one of the key men for Reggae Boyz today. - file

Jamaica's senior men's football team, ranked 51st in the world, will today tackle their Caribbean counterparts Guyana in an international friendly at the Montego Bay Sports Complex, as both teams prepare for the next stage of World Cup qualifying. Match time is set for 8 p.m.

Guyana, currently ranked 99th by FIFA, appear less-than-formidable opponents for the Reggae Boyz ahead of the June 8 qualifying match against Guatemala at the National Stadium, but assistant coach Alfredo Montesso believes it is this same approach that likely led to Trinidad and Tobago losing to the Guyanese and failing to advance.

"I think Trinidad and Tobago maybe took the same approach and not consider Guyana as a good team, and then they were surprised, and they are out of World Cup qualifying right now," Montesso reasoned.

"They (Guyana) have qualified for the next round, and they are a team that has been putting something together; they have chemistry and they have a good right back that is very aggressive, and they have a strong striker that we have to be aware of," he added.

Jamaica have triumphed on all three previous occasions the teams have met, coming away with 2-1, 6-0, and 4-0 victories. Montesso is confident the same result can be achieved by the Theodore 'Tappa' Whitmore-coached team, which is unbeaten in their last four outings, having registered three wins and a draw.

"What we have been telling our players is that a good performance can give us a very good opportunity to win the game," Montesso expressed. "Winning the game is very important, but more important than winning the game is to play with composure and organisation, and this is what we are looking for all the time," he added.

There are six first-time invitees to the national programme and the coaching staff will be keen to see what they have to offer. These include two players from reigning National Premier League champions Portmore United - Ewan Grandison and Rasario Harriot. The other local-based first-time invitees are Arnett Garden's Damion Hyatt and Harbour View's Jeremie Lynch. They are joined in the squad by the duo of Adrian Mariappa and Nyron Nosworthy from English second division club Watford. The two are both capable of playing in central defence or at right back.

The Jamaal Shabazz-coached Guyana team is not intimidated by their more-celebrated Caribbean opponents, as the team's assistant coach, Wayne Dover, aims for a positive result.

"We are going to approach the game with a positive mindset and look to come out with a positive result and have a very good performance, based on the preparations we have made coming into the game," Dover shared.

"The performance is one of the first things we will be looking for and, of course, the result as well. The pitch is flat, the ball is round, and everybody is in with a chance, so we will go out there and play as hard as we want and be positive," he added.

The Guyanese team is not short on experienced players of their own, as they have among their ranks former Newcastle United player Carl Cort, Shawn Beveney, who resides and plays in England, and Charles Pollard, who has been playing in Trinidad and Tobago's top league for 15 years.