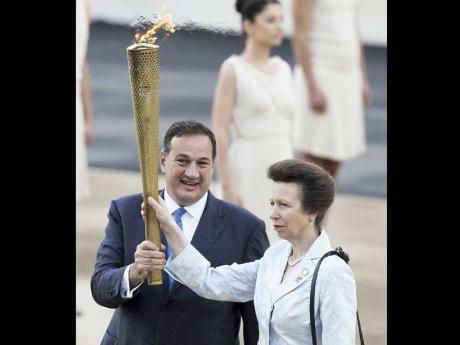 Britain's Princess Anne (right) takes the torch with the Olympic flame from president of the Greek Olympic Committee, Spyros Kapralos, during a ceremony at Panathinean stadium in Athens yesterday. The torch has now started a 70-day 8,000-mile journey to arrive at the opening ceremony of the London 2012 Olympics on July 27. - AP

The Olympic torch has been passed to London.

Hundreds of Greeks huddled beneath umbrellas and sat on the stone steps of the ancient stadium in Athens yesterday to watch the ceremonial handover of the Olympic flame to the organisers of the 2012 London Olympics.

They cheered the Greek national anthem. They cheered 88 schoolchildren belting out God save the Queen. But they really roared when they saw the fire.

"The flame belongs to the world," London Olympic Chairman Sebastian Coe said. "The arrival of the flame in the host nation is a clarion call to the athletes and young people in more than 200 nations and territories preparing to gather for the London 2012 Games."

There were jokes about the pouring rain - more London than Athens - with London Mayor Boris Johnson joshing that everyone would just have to get used to it. But the clouds actually pushed back for a few short minutes, giving the robed dancers, the drummers and the decorative Greek guards a chance to parade around, pompom shoes bouncing.

"Once the flame is lit, for all intents and purposes, the Games start," Coe told reporters in Athens.

The flame was lit last week at the Temple of Hera in Olympia, and has been making its way around Greece in a relay.