Chanderpaul to the rescue... as England's pacer Broad bags six 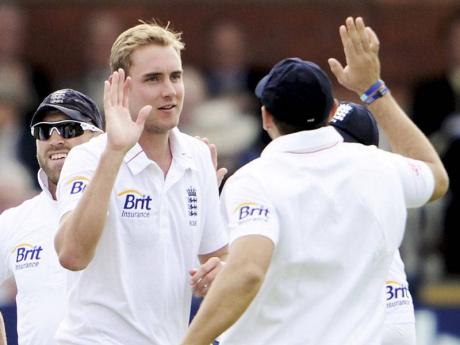 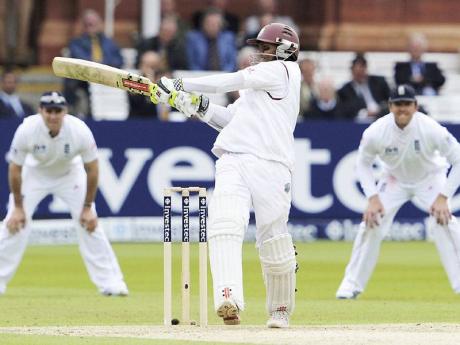 West Indies batsman Shivnarine Chanderpaul (centre) pulling to the boundary during the first day of the first Test match at Lord's cricket ground, London, yesterday. Chanderpaul was unbeaten on 87 at the close of play. - AP
1
2

The veteran left-hander was unbeaten on 87 at the close as West Indies, sent in to bat by England, crawled to the close on 243 for nine.

West Indies twice dug themselves out of holes to reach 181 for four in the final session, but then collapsed, to lose their last five wickets for 62 runs, as Broad knocked over the middle and lower order to finish with six for 72.

Opener Adrian Barath found some form with a stroke-filled 42 while Marlon Samuels got 31, and Darren Bravo, 29, before he was run out in a tragic mix-up with Chanderpaul.

However, in another single-minded performance that has characterised his 141-Test career, Chanderpaul once again held the innings together in a knock that has so far lasted just over fours and required 175 balls.

His 12 boundaries were evenly spread around the historic ground and were a combination of well-timed drives, nudges, and positive cross-batted shots.

When West Indies slipped to 100 for four just after lunch, he paired with Marlon Samuels to add 81 for the fifth wicket and prop up the innings.

West Indies were in early trouble when seamer James Anderson, who finished with two for 59, removed opener Kieran Powell and vice-captain Kirk Edwards with just over an hour gone in the morning session.

The left-handed Powell made a last-minute decision to play at one that nipped back, was a split second late with his defensive prod, and was bowled for five at 13 for one.

Edwards, with a string of failures on the tour, survived a huge lbw appeal first ball and never settled thereafter, struggling for 14 balls before eventually playing across an inswinger and falling plumb leg before wicket for one.

Barath and Bravo, both Trinidadians, then combined in a positive 54-run, third-wicket stand to ensure there was no familiar batting collapse.

The right-handed Barath struck nine fours - mostly an array of rasping off-side drives - in an innings that lasted 101 balls while Bravo was languid and fluent in his 74-ball knock that contained four boundaries.

They carried West Indies to lunch at 83 for two, but Barath lasted only 15 minutes after the resumption before slashing Broad to gully where Anderson held the catch on the second attempt.

Bravo and Chanderpaul moved West Indies to three figures without major alarm before disaster struck. Dropped on 29 at 100 for three in the previous over by Graeme Swann at second slip off Anderson, Bravo found himself involved in the 23rd run-out of Chanderpaul's career.

Taking off for a sharp single after Chanderpaul tucked a delivery from Swann square, Bravo found himself stranded at the opposite end with his senior partner after the Guyanese took a few exploratory steps and then turned his back.

Chanderpaul, who won a reprieve on 15 courtesy of the umpires' review after being adjudged lbw to Anderson without playing a shot, then assumed responsibility for the innings.

Abandoning his customary caginess, the 37-year-old played freely to raise his half-century off 103 balls with seven fours.

He twice smashed leg-side boundaries off Swann in the off-spinner's 12th over that cost 14 runs, and also helped himself to a couple of well-timed cover-driven boundaries off Anderson.

When Broad tested him with two successive short balls late in the evening, Chanderpaul dispatched both deliveries for four - the first a commanding pull through mid-on, and the second another pull through square.

Samuels, who hit four fours off 84 balls, tried to match Chanderpaul's enterprise but succeeded only in scooping Broad to point where debutant Jonny Bairstow took his first Test catch at 181 for five.

Denesh Ramdin (6), in his first Test in two years, stroked the third ball he received to the cover boundary but edged the fifth - one from Broad that bounced and swung - to captain Andrew Strauss at first slip to keep his miserable Test record intact.

Skipper Darren Sammy then struck three lusty blows in 17, and added 32 with Chanderpaul for the seventh wicket as they tried to keep the Windies afloat.

However, just when Sammy seemed set, he became Broad's fourth victim, getting a leading edge to Tim Bresnan at gully as he attempted to play through the onside at 219 for seven.

Kemar Roach (6) lasted seven balls before tapping the easiest of return catches to Broad before Fidel Edwards (2) edged the same bowler behind where wicketkeeper Matt Prior took a one-handed catch diving in front of first slip.