All set for JTA/Sagicor National Champs 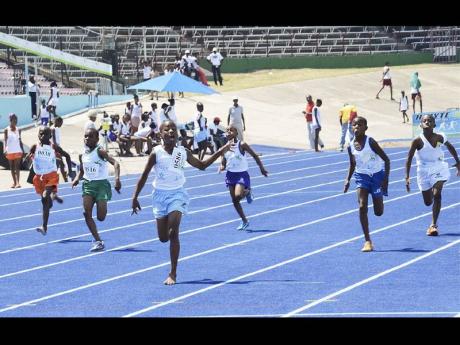 Ray James (third left) competing against Class Five boys (Under-9) at last year's staging of The JTA/Sagicor National Athletic Championships at the National Stadium. James was crowned Champion Boy for 2011 after achieving a total of 20 points for Westmoreland. He will compete in Class Four at this year's championships. - Contributed

The National Stadium track will be buzzing with excitement today with the 29th staging of the two-day Jamaica Teachers' Association (JTA)/Sagicor National Athletic Championships.

Seven finals will be contested on today's opening day, which is slated to begin at 11 a.m., while tomorrow's action will commence at 10 a.m. The two days of competition will feature a total of 52 events, 26 each for boys and girls.

The athletes will be participating in a wide range of track and field events including 80m, 100m, 200m, 400m, 500m, 800m, long jump, high jump, discus, and shot put. A champion boy and girl will be crowned at the end of the meet, with both set to receive academic scholarships.

Herman Reid, sports coordinator of Portland, said they are confident of victory. "We are the defending champions, and over the years, our strength has been in the middle-distance races. This year, it may be different, but we will be strong across all the categories."

St Andrew, who have won the title 16 times since its inception in 1984, will enter the championships full of confidence as they have retained many of their top athletes from last season.

"We have some very outstanding athletes in the Under-17 and Under-13 boys' section," Merlene Smith, coordinator of St Andrew, said.

"We have 86 athletes so far, but we are still going to try and come out with a bang," said Smith.

Three other parishes to watch are St Catherine, who placed fifth last year; St Elizabeth, who placed fourth; and Kingston, who were third.

Colin Spence, parish coordinator of St Catherine, said despite the challenges, their preparations have been going well going into today's championships.

"We have a serious challenge with our Class One and Two athletes," said Spence. "We are close to the urban centre and a lot of high school recruiting takes place, so we are not able to retain our better athletes," he said.

On the other hand, St Elizabeth's parish coordinator, Prince Rowe, said his camp was in high gear because they had retained 21 athletes from last year's team.

"We are on top of things," Rose said. "We will have athletes right across the age groups in the different categories that can get the job done for us."

Parish coach Suzette Reid from Westmoreland - home of the reigning 2011 champion boy, Ray James - claims that supporters can be on the lookout for James in the 100m Under-11 (Class Four) boys.

"Expect a good performance, especially from our Under-13 girls and boys," she said.

Sagicor's brand manager, Barrington Groves, has also indicated that employees of his company will be volunteering their services over the two days to support the meet.

The JTA/Sagicor National Championships has helped to produce many of Jamaica's outstanding athletes.