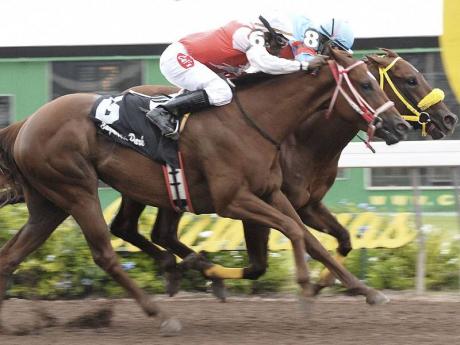 The 3-2 favourite SIR D (inside) is ridden flat out by Shane Ellis to stave off the fast-finishing KIPLING WEEKEND (Paul 'Country' Francis) by a short head in the seventh race over 1200 metres at Caymanas Park on Wednesday. SIR D is trained by Gary Subratie. - Colin Hamilton/Freelance Photographer

Although eluding punters at the midweek meet, the Pick-9 still boasts $1 million, while both Super-6s start anew with guaranteed minimums of $750,000.

The first Super-6 will be conducted from race one to six, the overlapping Super-6 from race six to 11. The latter includes the 72nd running of the Lotto Classic to be contested by a maximum field of 16 native-bred three-year-olds over 2000 metres.

We look at the first Super-6 which gets under way in the first race, the Lotto Challenge Trophy (non-winners of 3 other than) over 1500 metres, to be contested by seven starters.

The lightly raced SAINT THERESA will more likely start favourite following her impressive victory over 1200 metres on May 9 when returning the good time of 1:13.4 with Cardenas aboard.

Although facing stiffer opposition in the likes of recent winners SUNDOWN and SURREAL, as well as DON'TSAYAWORD and especially JOVOUN THE MASTER, SAINT THERESA has tremendous scope and should go all the way from the convenient mark of 52.0kg.

ABRAM STAR has worked fairly well for the second race over the straight-five course, and with the competition not too fierce, should come into his own and win from MY GIRL NALA and YU CAN DANCE, who scored an upset win over the course on her March 31 debut in maiden company.

Race number three, the $805,000 Lotto Encounter Trophy over 1400 metres, marks the return of proven grade one campaigner COMMANDING CHIEF since his below-par effort behind MARK MY WORD in the Harry Jackson Memorial Cup last Boxing Day.

Prior to that, he failed by a short head to catch subsequent 'Horse of the Year' SAINT CECELIA in the prestigious Gold Cup over this trip.

The 2011 St Leger winner steps down from grade company to overnight allowance to contest this race, and having worked well, the Everal Francis-trained colt represents a five-star banker against six inferior opponents.

Recent winner SOCA PARTY returns among lowly $180,000 claimers for the fourth race over 1300 metres and should repeat, despite the claims of CENTEYA, SHEISMYHEART, SANKOFA and consistent MR. BUTCHER in a field of 13. SOCA PARTY, who was claimed as a winner out of her last race over 1200 metres on April 21, is definitely a cut above the present opposition, obviously sound, and ought to be followed with former champion Omar Walker aboard.

The Gary Subratie-trained GRANDE MARQUE (Walker up), having finished second to SHINING GOLD over 1100 metres on April 21, should go one better at the expense of ACTUS REUS and the improving GREEN BERET in the fifth. Then, close all bets with the well-prepared VERONICA B (Walker again) with the tongue tie fitted in the sixth race, the Lotto Millionaire Trophy over 1200 metres for maiden three-year-olds, ahead of LISA VIBES.