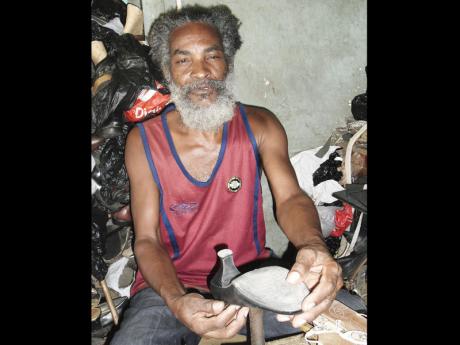 SANTA CRUZ, St Elizabeth:THE GLEANER recently spent some time with Osmond Samuda, alias Sergus or 'Shooi', a shoemaker who operates in the town of Santa Cruz. When The Gleaner walked in, he was listening to his favourite current affairs talk show while working on a shoe. His modest shop is located adjacent to Institution Drive in the town. Walk-ins and motorists alike regularly shouted greetings to him en route to their destinations. He automatically responded, even though he was engrossed in his work.

Between customers, Samuda told The Gleaner that he has been practising his craft for over 35 years. Although, Samuda is informally trained, he specialises in repair work. He said an older man, who mentored him and wanted to keep him from undesirable company, first introduced him to the profession. "I learned trade with him and even worked for him, and after a time he said if you see anything, you can go on you own," said Samuda. Following that advice, Samuda said he sought apprenticeship elsewhere until he was able to venture on his own. He said that his mother's dressmaking ability has influenced his work, as he grew up watching her and even learned to cut dress patterns. He acknowledges that the acquisition of those skills has helped him to be a better shoemaker.

Samuda disclosed that he experiences a number of professional challenges. One major one is unclaimed shoes, some of which are stacked on a shelf. "Some people come and say I am coming back tomorrow and weeks and months pass," Samuda explained. Sourcing the items needed to complete the repairs is another difficulty he encounters. On many occasions, he has to travel the 30-minute journey to Mandeville and, at times, the items are out of stock.

Samuda expressed concern about the disinterest of young persons in making his trade a career choice. He declared: "A guy has never come and asked me to show them this. I think it is dying out because most men who are in it now are older than me, so I think it is fading out." His solution for attracting young persons in the profession is for the Government to include shoemaking into the skills-based HEART Trust/NTA programme.

Keith England, a friend and customer, told a The Gleaner that Samuda "does excellent work and his attitude to customers is exceptional." England said that he visits regularly, even when he does not have any shoes in need of repair. Crystal Dunkley, another customer who refers to Samuda as 'Mass Shooi', said she has known him since she was a child, and has not experienced any problems with the quality of his work. "You can sit down and talk to him," said Dunkley.

Samuda is a family man. He has nine siblings and one daughter. He has been with his partner for over 35 years. When he is not at work, he spends time with his family, fish, play domino and help with the chores.