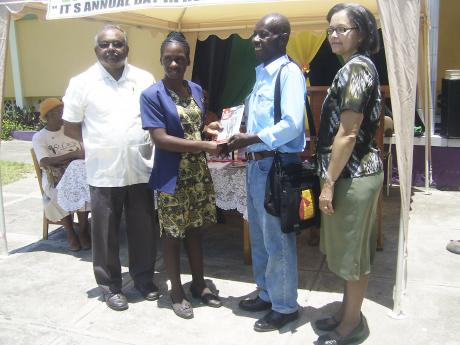 Roy 'Maas Roy' Archer, of Jeffrey Town, St Mary, gives a copy of his book, 'Life According to Maas Roy', to Tahalia Ogle, children's services librarian at the St Mary Parish Library, during the eighth annual Day in Honour of Tacky on Tuesday, May 8, at Claude Stuart Park, Port Maria, St Mary. At left is Lt Col E.V. Johnson, chairman, St Mary Parish Library, while at right is Annette Redway, Region Four director of the Jamaica Library Service. Maas Roy donated 16 copies of the book for distribution to other libraries. 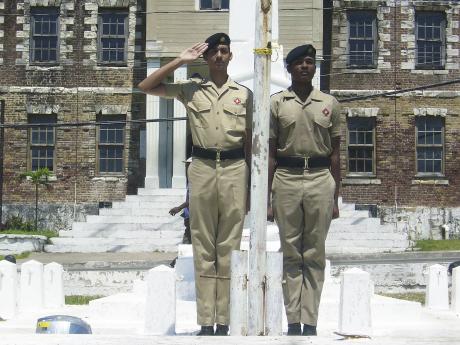 Cpl Andrew Philip and Cpl Jayce Roberts, cadets at St Mary High School, at attention during the playing of the National Anthem at the wreath-laying segment at the eighth annual Day in Honour of Tacky. 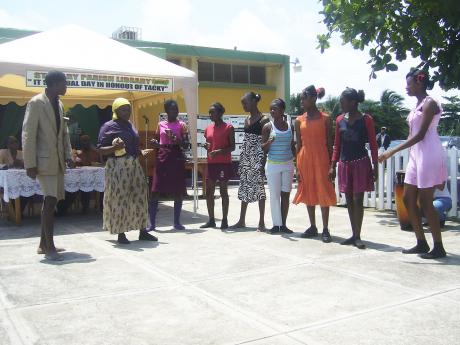 A group of students from Tacky High School in St Mary paying tribute to Tacky via storytelling and dub poetry during the eighth annual Day in Honour of Tacky. 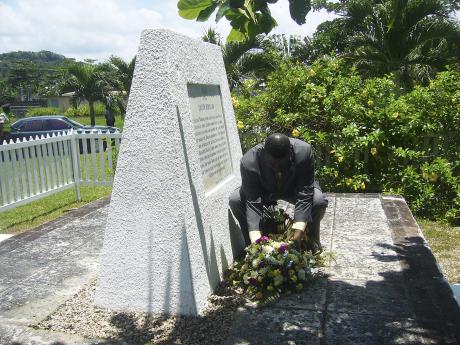 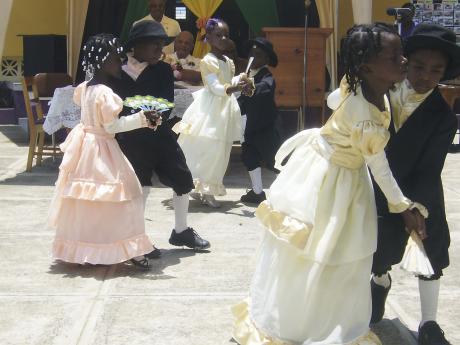 Children of Faith Builders Early Childhood Centre perform-ing the quadrille during the eighth annual Day in Honour of Tacky on Tuesday, May 8, at Claude Stuart Park, Port Maria, St Mary. 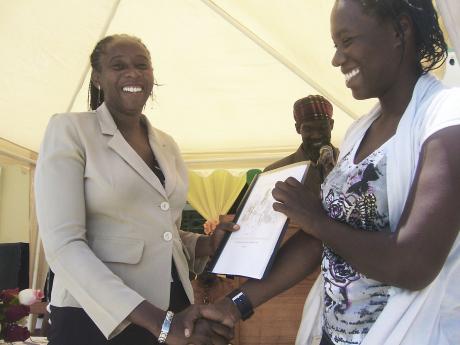 A representative of the Tacky Heritage Group makes a presentation to Laleta Davis-Mattis, executive director of the Jamaica National Heritage Trust, and guest speaker at the eighth annual Day in Honour of Tacky.
1
2
3
4
5
6

HE MIGHT not have the official national hero status that some people believe he should have, but for the last seven years, St Mary Parish Library has observed a 'Day in Honour of Tacky'. On Tuesday, May 8, for the eighth time, the day was observed at Claude Stuart Park in Port Maria, St Mary.

Tacky was taken from Ghana, where he was a Coromantee chief, and brought to Jamaica. In St Mary, he was enslaved on Frontier Estate, where he was subsequently made foreman. However, he used this position to plan and influence some enslaved people on his estate and neighbouring Trinity Estate to revolt.

On Easter Monday, 1760, Tacky and his warriors went to Port Maria, where they killed the shopkeeper of Fort Haldane, and took gunpowder, muskets and cannon balls. They then went to the plantations killing white people, and by morning light, hundreds more enslaved people had joined them.

Yet, it is said that one of the enslaved from Esher Estate went to inform the militia, who set out to stop the revolt. After the hanging in public of a certain obeahman, the warriors returned to their respective plantations leaving Tacky and only a handful of people to continue the fight.

When the dust had settled, it is said that about 60 whites, and 300-400 enslaved people were killed. However, Tacky's fate is mired in controversy, however. Some accounts claim he was killed by a Maroon named Davy, while others say he escaped behind a waterfall, and was an inspiration for later revolts.

On May 8, Laleta Davis-Mattis, executive director of the Jamaica National Heritage Trust, who was the guest speaker, said Tacky had a problem.

"He knew where he was, and he was not satisfied with where he was," she said. She used Tacky's story to bring home the point that though we may be tolerant of certain negative situations we are in, we don't have to accept them.

"And there is something I also want us to remember today. If you don't remember anything, remember this. The enslaved Africans who came to Jamaica, and those who were born here ... they never, ever accepted their state as slaves. They never did! If they did, then we would never have these wars, these emancipation wars ... ," Davis-Mattis said.

Tacky, she said, had a vision and he worked towards it. "Tacky may not have had something like a Vision 2030, but he certainly had a vision." Thus, she said we need to decide where we want to see the country go. We must decide what environment we want our children to grow up in, and that young people must also decide what they want to take from all that is happening around them.

In making reference to the warriors who abandoned Tacky and returned to the plantations, she said there might be power in numbers, but if there is no great crowd support, press on.

Well, Derrick 'Black X' Robinson does have a vision for this country, and it is to have the Order of National Hero bestowed upon Tacky. In his brief address to the small gathering, Robinson, who has been pushing the Tacky national hero agenda in more ways than one, said the next move is an all-island march by the Tacky Heritage Group, which made two presentations, one to the mother of St Mary's André Creary, former West Indies U-19 captain, on his behalf, and the other to Davis-Mattis.