Rodent problem in St Mary to be addressed 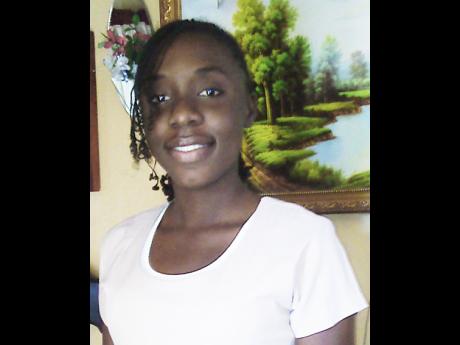 Samantha-Gaye Anderson, the public health intern, whose project to address rat infestation in Hopewell Phase 2, St Mary, has residents collaborating to deal with public health concerns in the community.-Contributed 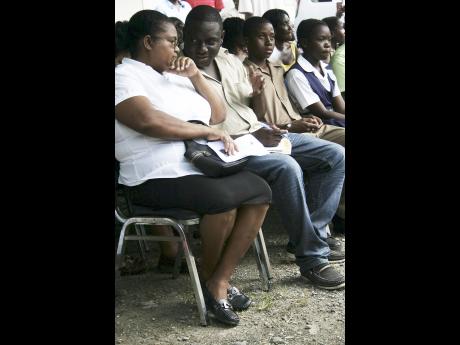 George Lewis (second left) of the National Solid Waste Management Authority certainly has Hope Orsmby (left) thinking as they share thoughts during the recent launch of a rodent-control programme for Hopewell Phase 2 in St Mary. Orsmby is a member of the community's recently formed Environmental Health Committee, which has taken on the challenge of addressing some of the issues affecting residents.-Photo by Christopher Serju 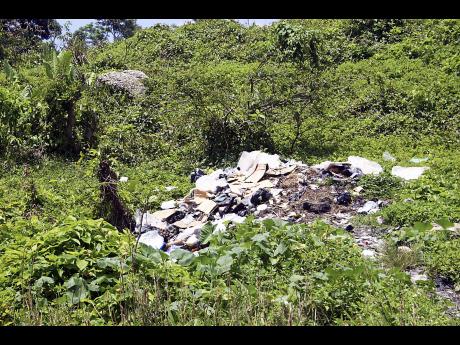 HIGHGATE, St Mary:THE RECENT launch of a rodent-control programme for Hopewell, Phase 2 near Highgate, St Mary, marked the culmination of four months of hard work by Samantha-Gaye Anderson, which included time spent walking the community in discussion with residents of the community and the formation of an environmental health committee.

Anderson, who is completing the final leg of a bachelor's degree in environmental health, majoring in public health, at the University of Technology, was seconded to the St Mary Health Department in January. She was mandated to design and implement a community project which would involve community participation and inter-sectoral and health education. Assigned to the sanitary district of Highgate, she was asked to focus on the locale of Hopewell Phase 2, an informal settlement formerly known as Capture Land.

A survey of the area found, among other issues, that 68 per cent of the community had a problem with rodent (rat) infestation, which was deemed the most pressing public health issue. The public health intern then formed an environmental health committee, comprising residents who demonstrated a commitment to work towards improving this and other conditions affecting the area.

The project is scheduled to be implemented by the end of June, after which Anderson's work will be evaluated. It involves the baiting of traps with poison, introducing strategies to reduce their places of shelter, and incidental provision of food and water. This will be accompanied by a public-awareness campaign to apprise residents of the steps being taken and the need for their collaboration in ensuring that maximum results are achieved.

Rat infestation is linked to the fact that the National Solid Waste Management Authority (NSWMA) does not provide a collection service in the community resulting in illicit dump sites which provide harbourage for the rodents. This is coupled with overgrown vegetation and the main agricultural activities centering on cocoa, coconuts, and banana - crops which are targeted by rats, thus providing a haven for them.

To access the NSWMA's collection service, residents of Hopewell Phase 2 must take their garbage out the main entrance, where it intersects with the Highgate-to-Richmond main road, and place it an area where it will be picked up by the trucks. However, residents living further away from the road might not find it practical to make the necessary trips to the main road, and some, in fact, have been dumping the garbage in their backyards, exacerbating the problem over the year.

George Lewis of the NSWMA gave a commitment at the recent launch of the rodent-control programme to work with the community in getting the problems resolved, promising that the garbage men assigned to the area would be apprised of the project and instructed to work with residents in ensuring that garbage is packaged, stored, and collected in a structured and timely manner.

He explained that the trucks used for collecting domestic garage could not be used to pick up white goods (or white garbage), such as old refrigerators, stoves, car parts, old beds, and other metal structures. He invited the community to seek the agency's assistance in getting rid of these items.

The baiting and strategic placement of traps with rat blocks throughout the community, the first step in the project, has already begun and residents are excited. Lascelles Agriculture Chemical Plant has donated 1,154 rat blocks and large, medium, and small traps with an estimated total value of $36,000. However, the sustainability of the project will require much more funding for more traps and blocks, as well as an ongoing public-education programme.

Anderson told The Gleaner that the current budget is $352,000; and while the community has been galvanised into action, such as a tag drive and bake sale, they are still a far way from that target. "So we are in the process of seeking sponsorship from local business operators and other related agencies. After that we will see where we are financially and then decide on further fund-raising activities," she said.

Public health inspector Rupert Stephens, who is the zone supervisor, used the launch to advise the public that the health department does not have a responsibility to solve rodent problems but is, in fact, mandated to help coordinate rodent-control activities.

"So we are not owning the problem. Our role is to assist in programmes to provide technical support systems and to coordinate the activities," he stated. "You can call on the health department for technical advice, but we are not the owners, and that is why we try to bring everybody on-board. It is everybody's responsibility, not the health department's ambit solely."