Setbacks will not deter Manchester 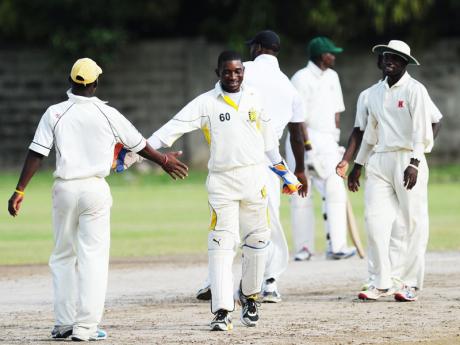 Kensington's players, including national wicketkeeper Horace Miller (second left), celebrating the fall of a Lucas wicket on day two of their match at Kensington Park in east Kingston on Sunday.- Ricardo Makyn/Staff Photographer

Despite not preparing as well as they would like, Zone B leaders Manchester will, this weekend, seek to move closer to a spot in the quarter-final round of the Jamaica Cricket Association (JCA) Senior Cup when they host struggling Clarendon at Manchester High.

Manchester, who are hunting a record fifth-straight hold on the title, were unable to prepare adequately for the clash due to a lack of finances, which has resulted in players missing training and training being held in less than ideal conditions.

"We have been having a difficult task in preparing the youngsters this week due to a lack of finances," said coach Barry Barnes.

"I don't know how comfortable the players will be therefore heading into the match, however, we are optimistic that they will come out and play nonetheless."

The lack of finances is a result of the competition having no sponsors, and the JCA as a result not having any funds to help offset the costs of participation, explained Barnes.

Manchester, who have so far notched up a win and first innings points record to be on nine points, will bank their hopes on two of the championship's most outstanding bowlers so far, left-arm wrist spinner Andre Dwyer and off-spinner, Jamie Merchant.

They will also look to batsmen Zeniffe Fowler, Donovan Sinclair and Damion Bryce.

Clarendon, on the other hand, lost first innings points in their first two encounters and are on two points. They will be hoping for outstanding performances from left-arm seamer Krishmar Santokie, Wayne Davis and Jai Paul Powell.

Six points are awarded for a win, three for first innings and one for a draw.

"Though not coming away with good results in our first two matches we have a good mindset heading into the match," said Santokie.

"We have not been batting well even though it is not entirely batsmen fault," said Boyd. "This is a result of us not having enough practice. However, in the past two weeks things have improved and the hope is that we will see a turnaround beginning with this match."

Hanover vs Westmoreland at Elgin Town

Police vs Portland at Elleston Road

Kingston vs Kensington at Sabina Park