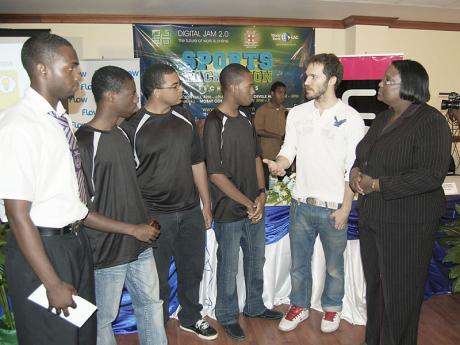 Mandeville-based 'Techi's' are bent in making their presence felt at the Digital Jam 2.0 Sports Hackathon/code sprint, which will take place at the Jamaica Conference Centre in Kingston from June 28-30.

Leading the charge for the Mandeville elites in technology are the Maestros, a group of sixth formers from deCarteret College, who won the all-island BlackBerry App competition last year.

There will also be groups from institutions such as Northern Caribbean University, as well as other colleges and high schools in and around Mandeville.

The town of Mandeville is now dubbed the 'Silicon Mountain' for its huge reservoir of technology-savvy youths being produced by the many tertiary institutions in the area.

This has resulted in the town being marked as the next information and communication technology hub of Jamaica.

The Digital Jam 2.0 Sports Hackathon, which has the tag line 'The future of work is online', is an initiative of the Jamaica Government through the Ministry of Youth and Culture and the World Bank. It is the first competition of its kind in the Caribbean and Latin America.

It will have the technologically skilled and creative minds of persons between the ages of 13 and 35 developing apps for sports programmes in Jamaica in the areas of track and field, cricket, football and netball.

creating change in a day

The competitors will be required to develop their apps - which can be web-based or from mobiles - in 24 hours.

The apps should display ways of improving a particular area in the respective sport or solve problems that may exist.

There will also be internships for the winning teams at platinum sponsors FLOW and gold sponsors LIME, as well as several job opportunities for participants.

The Digital Jam 2.0 team has been holding Tech camps across Jamaica in a move to draw interest in the sport hackathon.

One such camp was held last week in Mandeville and had a large group of 'tech heads' in attendance.

"In my mind, this is a dream come through. You can pick your skill against other young developers to see exactly where you fall along the line. You have your chance to meet some of the amazing guys who have done amazing things already mentoring you through the process," said Gebre Wallace, a member of the Tech Camp team and founding member of Slash Roots Organisation, while speaking at the Mandeville Tech Camp.

Wallace added: "You will also have persons from all over the world looking at you, looking to see what you are coming up with."

Interested persons can register for the Sports Hackathon at digitaljam2.com.