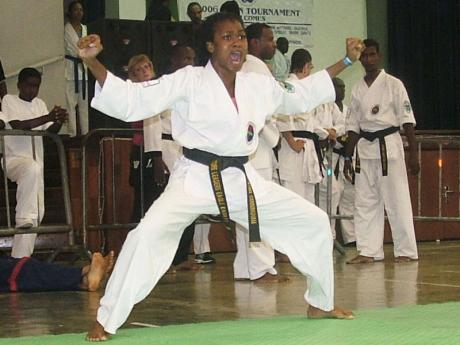 CAPTAIN Sheckema Cunningham is a heavy favourite to win her division in tomorrow's Philadelphia Taekwondo International in the United States (US) as members of Jamaica's female combined martial arts team, the McKay Lady Knights, bow into their first international fixture of the year.

Cunningham is in good form after winning the female grand championship at Saturday's Ningen Open, beating Merissa Jones in the final. She is now tied on points in the black belt championship with Chang, who had won the season-opening Jamaica Taekwondo Open female black belt sparring title.

Richards, who attends Alpha's Convent of Mercy Academy, will compete in the female adult category in Philadelphia as part of her preparation for participation at the US Open World Championships in Orlando in July.

She is vying to compete in the adult lightweight category in the combined team's round-robin during the Central America and Caribbean segment at the US Open.

The 15-year-old is among four fighters competing for two spots on the three-member team to the US Open, as the microweight spot is automatically filled by captain Cunningham.

Chang, Ashieka Dyer and Marissa Jones, all called to camp since May 1, are the other fighters vying for the two remaining spots.