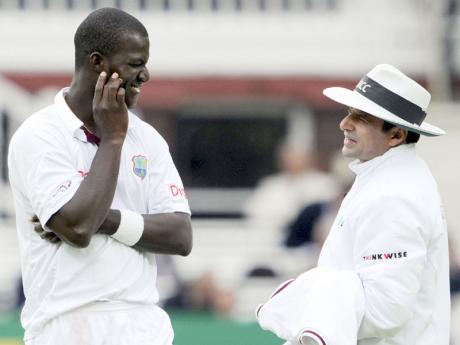 West Indies Darren Sammy (left) speaks to umpire Aleem Dar after his appeal for the wicket of England's Jonathan Trott was turned down during the second day of the first Test match at Lord's cricket ground, London, yesterday.- AP photos 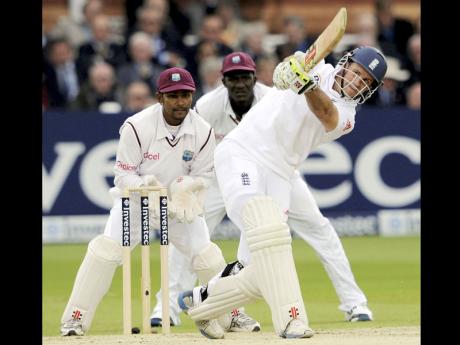 England's Andrew Strauss hitting out during his unbeaten 121 on the second day of the first Test against the West Indies at Lord's in London yesterday. The wicketkeeper is Denesh Ramdin while West Indies captain Darren Sammy is at slip.
1
2

When bad light ended the second day's play two deliveries into the second new ball, England had marched to 259 for three, already a lead of 16 runs with three days remaining in the contest.

Strauss was unbeaten on 121, his fifth century at Lord's, and was with the stylish Ian Bell who was on five from the 13 balls he has faced.

The prolific Jonathan Trott cashed in with 58 while Kevin Pietersen (32) and Alistair Cook (26) got starts but failed to carry on.

England were turning the screws on the Caribbean side at 167 for one at tea, but Trott and Pietersen fell late in the evening, offering the Windies some respite on what was a tough day in the field.

Earlier, West Indies failed to add to their overnight score as debutant Shannon Gabriel's first Test innings lasted one ball, when he edged the first delivery of the morning to Graeme Swann at slip off seamer Stuart Broad.

The wicket gave Broad figures of seven for 72 and left Shivnarine Chanderpaul stranded on 87.

Strauss, under fire in the build-up to the Test over his lack of form, then took centre stage at the ground where he plays his domestic cricket for Middlesex.

The left-hander faced 249 balls and counted 19 fours - mostly a plethora of off-side strokes - as he dominated an ineffective Windies seam attack.

He put on 47 for the first wicket with Cook, fashioned 147 for the second wicket with Trott - a stand that put the game firmly in England's favour - before adding a further 50 with Pietersen for the third wicket late in the day.

Once the Windies innings was out of the way, England busily set about their task, with Strauss and Cook scoring freely as the Windies seamers found no swing despite the murky conditions.

Strauss, short of form for the entire winter, was quickly into stride with scorching off-side drives off fast bowlers Fidel Edwards and Kemar Roach, while Cook's four boundaries were all off-side strokes.

West Indies' only success in the morning session came when Cook dragged a delivery from Roach on to his leg stump on the stroke of the first hour, after facing 42 balls.

Strauss and Trott then carried England to lunch on 80 for one before dominating afterwards.

West Indies were unlucky not to have Trott out twice after the interval, without adding to his 17. In the second over after the break, their lbw appeal was turned down after the right-hander missed a fullish delivery from medium pacer Darren Sammy and was struck on the pads.

On review, replays showed the ball would have hit the stumps - but not enough of the leg-stump - and Trott remained.

Ten balls later in Sammy's next over, Trott got a faint edge through to wicketkeeper Denesh Ramdin but again the Windies had their appeal turned down.

While they chose not to review it this time, replays indicated Trott had indeed nicked the delivery.

The 31-year-old continued unfazed, stroking six fours off 134 balls, and adding to the tourists' frustration.

Strauss pressed on, meanwhile, gathering two boundaries in Sammy's eighth over that cost 11 runs and another two from the same bowler to raise his half-century.

The luckless Sammy, who went past the bat on a few occasions, finally found reason to celebrate when Trott perished 55 minutes after tea, driving at one that swung late and was well taken behind by Ramdin at 194 for two.

Strauss continued to grow in confidence, cutting Sammy for four to cruise into the 90s before driving the Windies captain straight for another boundary to move to 95.

He suffered a huge slice of luck when he was dropped on the same score by Chanderpaul at slip off an Edwards no-ball but duly reached three figures four overs later when he slashed Sammy square for another boundary.

Pietersen also threatened, striking five fours off 51 balls in a typically free-scoring knock before falling 20 minutes prior to the eventual close.

Earlier struck on the forearm by a short one from Roach, Pietersen went tamely, top-edging a cut into Ramdin's gloves off off-spinner Marlon Samuels.