Lotto Classic will be All Correct 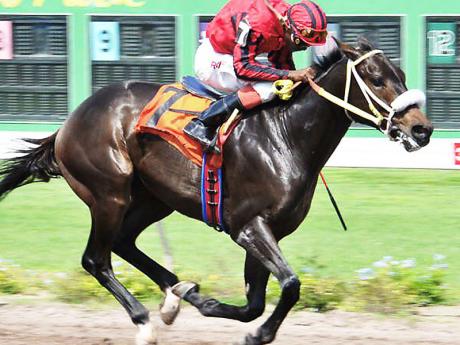 ALL CORRECT ... the hot favourite for today's Lotto Classic-file

ALL CORRECT, who beat all but UNCLE DONNY in the April 9 2000 Guineas, should rebound with a win when he takes on 15 opponents in the 72nd running of the Lotto Classic for the Governor's Cup over 2000 metres at Caymanas Park today.

Trained by 11-time champion Wayne DaCosta, ALL CORRECT has been asked to shoulder topweight of 57.0kg with Shane Ellis replacing stable jockey and leading rider Dane Nelson, who rode him in the 2000 Guineas.

But in the absence of UNCLE DONNY, who elected to bypass today's race as his Derby prep in preference to an open allowance contest over 1820 metres on Wednesday, he should step up to the plate and send his stocks soaring for the June 9 Derby.

Today, the dark bay gelding by Storm Craft out of the Royal Minister mare, Royal Pizzaz, will be opposed by some lightly weighted opponents, including two classy fillies in PHILISTIA, who was runner-up to EXOTIC GOLD in the recent Bigga Oaks over this trip and the lightly-raced STAR FLYER, who was a beaten favourite (third) at 6-5 in the same race.

Historically, the Governor's Cup has been a graveyard for favourites, having seen a number of light and middleweight horses triumphing over the years at good odds, notably the subsequent Derby winners HE'S REALLY OK and DORVAL in 2009 and 1995, respectively, RUN PAPA RUN in 2004, and HERECOMESFUDGIE in 2003.

History aside, the race more than likely will come down to ALL CORRECT, the Noel Ennevor-trained PHILISTIA, who totes a mere 50.0kg with Paul Francis aboard, and the Anthony Nunes-trained STAR FLYER, who also carries 50.0kg under champion jockey Dick Cardenas.

Outside of the top three, others such as the 2000 Guineas third-place finisher AVENTURA, PRINCE ANDREW, and the improving hat-trick seeker FANCY PANTS will have their supporters.

But for me it has to be ALL CORRECT, who, last Boxing Day, emerged the winter book favourite for the classics by virtue of winning the $4.25 million Supreme Ventures Jamaica 2-Y-O Stakes over 1600 metres in a driving finish from PHILISTIA. I envisage a similar outcome today.

Despite having to give lumps of weight all around, ALL CORRECT is by no means too heavy to take this lucrative prize. He has good pace and more important, finishing speed to match.

I also like returning champion sprinter and 'Horse of the Year' SAINT CECELIA to stop the unbeaten American colt BLAST THEM AWAY in the $1.4 million Lotto Sprint (grade one) secondary feature; SAINT THERESA to repeat in the first race; down-in-class COMMANDING CHIEF to romp the third for the Lotto Encounter Trophy; SOCA PARTY to repeat in the fourth; VERONICA B in the sixth; and MOM'S SECRET to outfinish KAYLA FELECIA in the seventh for the Lotto Rush Trophy.