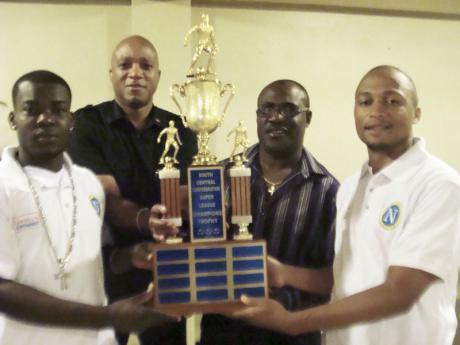 Scotia got the winner via another Tivoli player, Damion Gordon, on the stroke of half-time in the 40-minute encounter.

A total of 16 of the 21 teams scheduled to play in the KSAFA/Western Sports Business House football, set to start tomorrow, participated.

Red Stripe's opening batsman, Cleon Thompson, scored the first century of the Business House cricket season, 118, to lead his team to a 161-run victory over NWC at Red Stripe Oval, Spanish Town Road, last week Sunday. It was the third round of the Reggae Jammin 50-over competition.

AT CHALMERS AVENUE: The match between former champions LIME and Sagicor was rained out.

The competition continues tomorrow with four matches: Digicel vs Jamaica Broilers at Kensington Park, NHT vs Jamalco at Mico, Sagicor vs NWC at Emmett Park, and BOJ vs Red Stripe at Mona. All matches start at 10 a.m.

The KSAFA/Western Sports Business House football competition kicks off tomorrow afternoon at the Red Stripe Oval, Spanish Town Road, with a dress parade and two opening-round matches in Division One and Two.

As many as 21 teams will play in two divisions - 10 in Division One and 11 in Division Two, including newcomers Bank of Jamaica, returning for the first time since 1999, and National Continental Baking Company.

The day's activities will commence at 1 p.m. with the dress parade, followed by the Division Two opener between Jamaica Urban Transit Company (JUTC) and National Continental Baking Company at 2 p.m., and the Division One clash between defending champions Petrojam and promoted Division Two champions Jamaica Customs at 4 p.m.

Saturday, May 26 will see one of the first big Division One clashes between Scotiabank and The Gleaner, two former champions, at the NWC playing field, Mona. The Gleaner are defending KO champions.

SDC, The Gleanerwin in BH domino

Defending division One champions Sports Development Commission (SDC) defeated former champions Seprod 136-105 in the second round of the Business House domino competition on Friday, May 11.

Parish rivals Jamalco and Windalco will meet tomorrow in the finals of the Jamalco Open, the first major trophy be decided on the Clarendon Netball Association's 2012 calendar, at the Mineral Heights Sports Complex. While the final is set to begin at 4 p.m., the day's activities will get under way at 11 a.m., when majority of the 30 teams which participated in the league will be involved in a one-day rally.

In last weekend's semi-finals at the same venue, Windalco qualified easily, dispatching the schoolgirls from Denbigh High 43-19, while in a more evenly matched affair between senior teams at this level, Jamalco rallied for a 36-26 win over Mico.

Based on the semi-finals, the key players for Windalco will be Denene Taylor, who scored 16 from 23 tries, and Annakay Griffiths, who netted 27 from 33. Former national goalshooter Elaine Davis, who collected the afternoon's biggest haul - 30 from 33 attempts - as well as goalkeeper Nicole Aiken, should anchor Jamalco's bid.

In a small celebratory function hosted at the Golf View Hotel in Mandeville on Wednesday, South Central Super League champions New Green collected the lion's share of the half-a-million dollar sponsorship in prize money, courtesy of Image One, a graphic artist and marketing company led by Ainsley Lowe, an executive of the Clarendon FA and chairman of Super League Club Spartan FC.

New Green earned $250,000, runners-up Rivoli United gained $125,000, while third-place Meadows got $75,000, and Newlands, the fourth semi-finalist, $50,000. Confed Chairman Dale Spencer said the deal had been arrived at through the approach of Lowe, who made the commitment to provide the prize money to the four semi-finalists, rather than sponsoring the league itself. The gesture broke a four-year spell in which the Confed had not been able to offer monetary incentive or attract sponsorship.

Rivoli's Anthony Green was the only player to collect monetary reward for individual brilliance. He was the leading goalscorer in the league and was also adjudged the Most Valuable Player in the Under-20 league. He received $10,000.

Four Paths entered the final day of the league championship one point ahead of Jamalco. They left nothing to chance. Rock River, who had saved relegation from the previous round, did not offer much resistance. Jamalco won 3-0 against New Bowens to finish agonisingly a point short in a league they were favoured to win, having won the mid-season final.

Black River and Appleton will meet tomorrow in the first leg of the final of the Wray & Nephew-sponsored St Elizabeth Major League at St Elizabeth Technical High School in Santa Cruz at 3:30 p.m. At 1 p.m, Newell and Tafari Lions will contest the third-place play-off.

In last weekend's final leg of the two-way semi-finals, Newell held Appleton to a 0-0 draw, but the damage had been done the previous weekend when Appleton won 7-0. The Black River/Tafari Lions clash needed extra time and penalties.

Black River, who had beaten Tafari Lions in the mid-season final, entered the second leg with a 1-0 advantage. That was quickly cancelled by Marlon Fletcher's first-half goal. With the tie at 1-1, Andrew Beckford scored to equalise on the day, but put Black River ahead 2-1. However, Pier Lyn scored to make it 2-1 for Tafari Lions and 2-2 overall.

That score would last throughout extra time until Black River won 3-1 on penalties.

Holland PYC and Northampton will meet in today's mid-season final of the St Elizabeth Co-op Credit Union Division One competition. Kick-off time is 3 p.m. at the New Towne Community Centre in Black River.

After 11 preliminary-round matches, Holland PYC have the superior all-round record, sporting eight wins, one draw and two losses. Northampton have six wins, two draws and three losses. In their final match, signalling the end of the first half of the preliminaries, Holland slammed Longwood 5-0, while Northampton and Round Hill drew 1-1.

The second half of the competition resumes next Wednesday.

Lacovia lead Zone A on 13 points, followed by Brompton on eight, Braes River on seven and Mary Seacole on six. Mary Seacole are in line to secure the zone's other qualifying spot if they can beat lowly Carisbrook in the zone's final game at the Santa Cruz Community Centre on Monday.

Burnt Savannah, who are the defending champions, booked first spot from Zone B with 12 points, followed by Holland on nine, and both Black River and Glen Stuart on six apiece. In the latest round of matches earlier this week, the defending champions defeated Black River 2-1, Holland whipped Spring Ground 7-0, while Glen Stuart topped St Elmos Prep 3-0.

Greenvale and Alligator Pond will clash today at Kirkvine in the final of the Power Services Co Ltd Manchester Division Two competition. At stake is prize money, but more important, a chance to be promoted to the parish's Major League.

In last weekend's semi-finals, Greenvale made the final, courtesy of an eighth-minute strike from Kemar Ricketts against Allied United.

Portsmouth, defending champs of the Portmore INSPORTS/LIME All-Island Primary football competition, will face off against hot side Gregory Park in one of two semi-final games, following the final preliminary-round matches that were played at the Portsmouth Primary playing field last Tuesday.

Portsmouth came into their match against Greater Portmore needing a win or face elimination, and won 2-0, courtesy of goals by Leonardo Gordon and Tavajay Thompson. With the win Portsmouth jumped to nine points from four games, the same as group winners Bridgeport. However, the latter have a better goal difference.

Gregory Park, last year's beaten finalists, will start as favourite in that semi-final clash with Portsmouth, which is a repeat of last year's final.

In group one, out-of-contention Waterford sent Southborough packing as they whipped them 4-0 in what was both teams' last game of the season. The result meant that Independence City (six points) joined group winner Gregory Park (12 points) in the semi-finals. Independence City will tackle Bridgeport in the next semi-final on a date to be announced.

Two weeks ago, a number of upsets turned the league on its head in quarter-final action. Third-seeded Caribbean Classic, the defending champs, surrendered their title in a close 300-295 loss to ISCF; top seed Fort International, the hot favourites, were stunned 300-274 by Eradication; second seed Ackee Pod went down 300-272 to a confident Colours Sports Club; while fourth-seeded Right Stuff romped to a 300-271 win over arch-rivals and fifth seed Passage United.

Last year's beaten finalists, Cumberland FC, and East Portmore Portals are both looking for their second win as the two collide in the Leander Marshall-sponsored Portmore Under-13 Football League at the Portsmouth Primary playing field in Portmore, today at 2:30 p.m. In the opening game at the venue, Portmore United face Daytona at 1 p.m., while Westchester take on defending champs Wanderers at 4 p.m. in the final match of the day.

Old Harbour carved out the win via a strike from Ramone Crawford and an own-goal. In the next game at the venue, Rivoli United thumped Village Linx 3-1.

The presentation of awards for the Power of Faith Ministries (PFM) Twenty20 Church Cricket League will take place this afternoon at the PFM Multi-purpose Complex, Portmore Town Centre, commencing at 4:30 p.m.

Guest speaker is the Rev Winston Scott, pastor of the Braeton Church of Christ. Other persons of interest include Bishop Dr Delford Davis, head clergyman of PFM, and Mayor of Portmore George Lee. The sponsors include Greif Jamaica Ltd, Hi-Lyte energy drink, Lascelles Distribution and Sports Development Foundation. There should be representatives from these groups at the ceremony. Old Harbour New Testament won the championship for the first time as they defeated four-time champs PFM International in the final.

Cumberland created a big upset as they eliminated Portmore champs Bridgeport from the Portmore leg of the SDC All-Island Twenty20 cricket competition with a five-wicket win in round-of-16 action last Sunday.