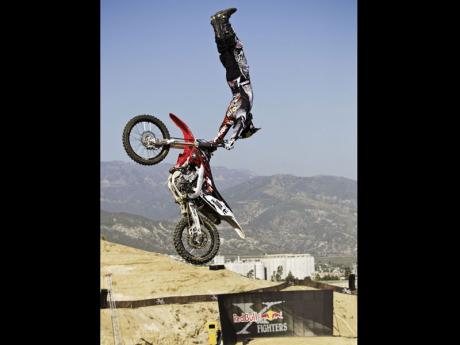 Todd Potter awes the crowd with a move known as a Ruler during competition at the Red Bull X-Fighters World Tour at Glen Helen Raceway in San Bernardino, California, last week Saturday.-Contributed

Hometown hero Todd Potter once again proved that with big risks come big rewards, and while other riders shied away from the challenges of the Glen Helen track, the American grabbed the bull by the horns, twisting and flipping his way to top spot at the second tournament in the Red Bull-X-Fighters World Tour last Saturday.

Potter prevailed in a showdown with elegant Frenchman, Thomas Pages, and while both men failed to perhaps attain the heights of their semi-final showings, there were still plenty of tricks to awe the 15,000 spectators that turned out at the Glen Helen Racetrack for the event.

Another American, Wes Agee, in his first major tournament, was also rewarded for his bravery as he copped the Best Trick Award, presented for an incredible back-flip up the 30-foot step-up (steep hill incline) and third spot.

"You just had to sack up and do it. That was the bottom line," Potter told journalists in a press conference following the event.

"All the talk this weekend was about the course. You had to put a line together all over the course. You can't just circle, hit a ramp, and come back and hit another ramp. This takes you out of your element and into the real world of riding dirt bikes and freestyle motorcross," he added.

All the talk for most of the week had been about the racetrack, the biggest ever constructed on the tour, with huge distances, the longest being 102 metres and high step-ups to jump. But while most of the riders avoided the steep jumps, Potter embraced it from day one, copping third place in the qualifiers with what became a trademark flip up the distance, defeating Dubai winner Levi Sherwood, compatriot Agee, and then Pages.

"This my first big freestyle win and it just feels awesome, especially to do it on a course that was meant for us. We grew up in Beaumont, Ocotillo, and this is what I wanted to do all my life," Potter said.

Second-place Pages was also impressive, and although losing in the final, took on the step-up with a sense of flair and the dramatic, which earned the appreciation of the crowd. Although disappointed with the loss, the Frenchman was simply happy to be back on the tour after missing a couple of years.

"It was good because it has been a long time and I did not know if I was still good enough. I was very happy to accept the invitations," Pages said.

The tour will next move to Istanbul, Turkey, and begins on June 16.