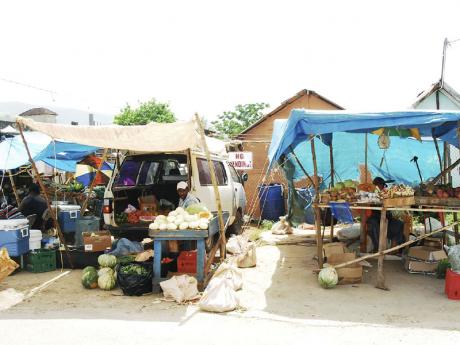 Food vendors set up their stalls, with the 'no vending' sign in the background, outside the Santa Cruz Market on Monday. This practice is expected to be a thing of the past when the planned refurbishing of the facility is completed.- photo by Mark Titus

WESTERN BUREAU:The bustling town of Santa Cruz in St Elizabeth is set to benefit from a major multi-agency clean-up campaign, starting with the food market, on Labour Day, May 23.

"We are working in conjunction with the business community, parish council, police, and other key stakeholders and have selected the Santa Cruz Market as our main Labour Day project," said Raymond Pryce, member of parliament (MP) for North East St Elizabeth.

The initiative will be part of a project dubbed the Santa Cruz Business Improvement District (BID), which is aimed at creating a healthier working and business environment for the public.

The initial phase of the project will see the market completely retrofitted, with completion slated for Independence Day, August 6.

"Persons on the roadside contributing to the traffic congestion will be relocated to the market and registered. So you will experience a different feel in time in the streets of Santa Cruz in terms of traffic congestion," Pryce explained.

"Then you will see a far cleaner town and a less-congested roadway."

According to the MP, residents will be employed to collect and sort the waste in the market and business district for an organic fertiliser project in conjunction with the Sidney Pagon High School. The Santa Cruz BID will look at how players deal with their solid waste.

"What we are trying to do is prevent the likelihood of rat infestation, and we are keen that the problem that has affected other areas won't affect Santa Cruz."

Pryce, who succeeded Kern Spencer as the constituency's political representative following the December 29 general election, is also keen on addressing the problem of flooding that plagues the town during heavy rains.

"Flooding is a significant feature of the Santa Cruz division and north-east St Elizabeth in general. There are large areas that are part of the Jamaica wetlands system," he said.

"If those drains are not properly maintained, it does not take a heavy downpour of rain to create a flooding problem, so this must be addressed as a matter of priority."

Youth groups in the area have come together to form the St Elizabeth Youth Brigade, which will also play a pivotal role in the clean-up exercise.

"The youth brigade will become the first response during the hurricane season. Training is now in full swing, however, their roles will cover many areas, many disciplines," Pryce noted.

The roles include work in the environment, public health areas, community tourism, and homework assistance.

"This is a great opportunity for us," said one youngster who identified himself only as 'Marlon'.

"At least we will have something to occupy our time. There are no jobs available, and we have been sitting around doing nothing, so this is good."