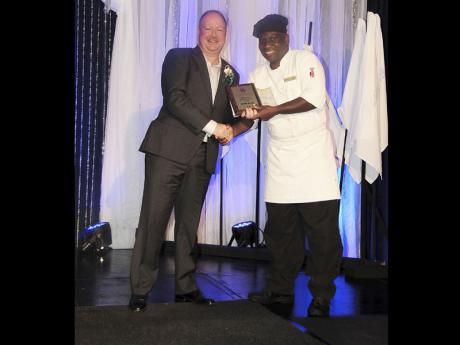 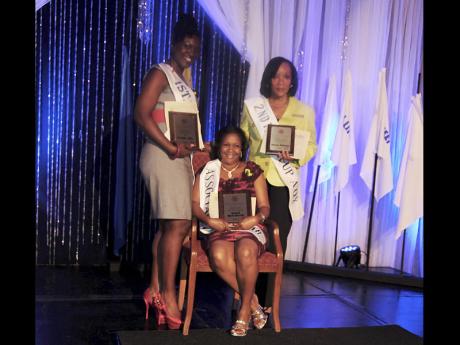 Norette Myrie Barrett (seated) - of the Bar Department - Associate of the Year, flanked by first runner-up Camille Ellis (left) of the front office, and second runner-up, Shirley Williams, of the executive office, at the Hilton Rose Hall Resort in Montego Bay.-Photo by Barrington Flemming
1
2

WESTERN BUREAU:Norette Myrie-Barrett was the toast of the 22nd Annual Service Awards Ceremony of the Hilton Rose Hall Resort and Spa on Tuesday when she copped the Associate of the Year Award.

Myrie-Barrett, who works at the bar, has been at the hotel for the past 15 years. She said it felt good to have won and lists the award as one of her best moments since working at the resort.

"I am surprised, but I am happy. It feels real good. This is just great!" she said.

She received among her awards, $90,000 in cash; a return trip to the United States; a four-night complimentary stay at the Miami Sheraton Hotel in Florida; a 32-inch flat-screen television set; and a BlackBerry smartphone.

many gifts and prizes

Sixty-six persons were awarded at the ceremony, with four persons receiving awards for five years of service, 22 for 10 years, 10 for 15 years, and 13 persons for 20 years of service.

Otis Schloss from the Engineering Department was awarded Supervisor of the Year while Conroy Thompson, group sales manager, was chosen Manager of the Year.

The Master of Smile Award, which carries an award of $80,000 and a 20-inch flat screen television set, among other prizes, was copped by Romaldo Simpson. Orville Brown of the kitchen took home the Third Shift Shining Star Award.