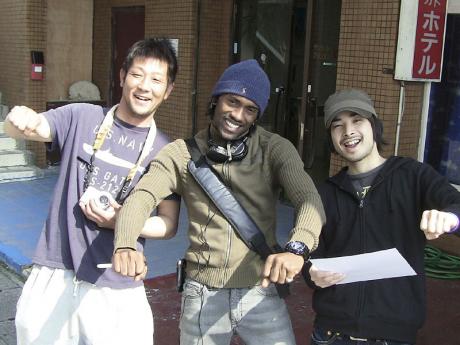 Dancehall artiste Baby Chris (centre) with fans in Japan during his tour. - Contributed

Baby Chris, whose real name is Christopher Lloyd, said his music is gaining international recognition as he and his management team explore new markets.

The dancehall artiste recently toured Okinawa, Kyoto Shi, Osaka, and Fukuoka in Japan, and described the visit as a great experience.

"It was the first time I toured Japan, and I must say I was surprised at how well they received me and my music," he told Western Focus.

"They love the music and were even singing word for word, so it just goes to show the different markets we as dancehall acts can seek out and be a part of."

Back in Jamaica for the next few weeks, Baby Chris says he will be participating in a number of promotional performances, and will begin filming a music video with Ding Dong for their new single, Ravers.

He is also set to participate in the upcoming annual Celebrity Soccer Match in Brooklyn, New York, on May 28, where he will share the stage with entertainers such as Beenie Man, Spragga Benz, Ding Dong, and Mad Cobra.

Baby Chris, who copped the Most Improved Artiste title on the Linkage Award Show, is receiving heavy rotation across the US for his local hit single What Did I Do, recorded on the Split Personality Rhythm, and the newly released Why.

"He is getting a lot of attention from mainstream players in the industry, and major recording labels are showing an interest in the artiste. Even with his busy schedule, he will undoubtedly be doing extensive recordings for the release of his next album later this year," said his manager, Clifton Lawrence, of 5 Stars Recording Incorporated.