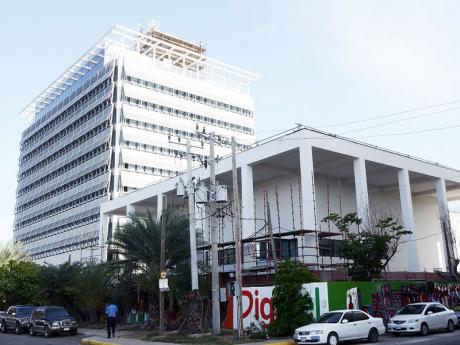 The new Digicel building on the Kingston waterfront, to be the home of Digicel Group and Digicel Jamaica.-PHOTOS BY Rudolph Brown

By the close of summer, Digicel is expected to vacate its old corporate base in New Kingston in favour of a spanking new headquarters downtown.

It will leave 70,000 square feet of space, spanning seven floors on the RKA Building, available, and its owners have listed the space for rental.

The property is owned by the CIBC FirstCaribbean International Retirement Fund Limited. It is being marketed by Valerie Levy & Associates.

The investment property was purchased by the pension fund from Bevad Limited, which is in the business of property management.

Sunday Business was reliably informed that the RKA building should be vacant by August.

Digicel did not confirm the month, but indicated that it would be around that period.

third quarter of this year

"Digicel is on track to complete the construction of its new headquarters in downtown Kingston and is looking forward to moving into its new office by the third quarter of this year," said Donovan Betancourt, head of facilities management and technical operations, via email.

Each floor has over 10,000 square feet of space. The annual lease being pitched at prospective tenants is about US$14 per square foot excluding general consumption tax and maintenance, according to managers of the building, Bevad Maintenance Services Limited.

Realtors Valerie Levy said the space would be ideal for a company in the business of information technology or telecoms but that the space was open to any qualified applicant.

Digicel made the building its home for over 10 years, but in 2010 began to lay the groundwork for a new global headquarters on the Kingston waterfront.

The downtown investment is valued at US$65 million and will bring Digicel's near 1,000 group and local staff under one roof.

The RKA building is occupied to the rear by the Capital and Credit Financial Group. It's not clear whether CCFG will continue to occupy the space once its expected merger with JMMB is consummated.

CCFG chairman and group president Ryland Campbell said Wednesday that having moved to the location in 1999, there are no immediate plans to relocate.

"With regard to any possible relocation of office by any Capital & Credit company such a decision would certainly be taken after an assessment of future options," said Campbell.

Tracey Graham, managing director of Bevad Management Services Limited, said RKA was developed by a related company, Bevad Limited, in 1998 and was first leased to the Planning Institute of Jamaica (PIOJ) which subsequently left for its own property on Oxford Road. Digicel then leased the space.

Sale of the property to the FirstCaribbean pension fund was concluded in 2008. Other tenants currently occupying space there include Jamaica Energy Partners and the regional treasury operations of CIBC FirstCaribbean International Bank.

The maintenance contract for the building is retained by Bevad Management Services, a company related to the original owner.