The Music of Calabash 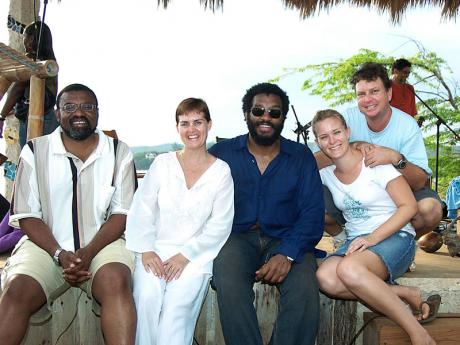 This team was the driving force behind the staging of the Calabash International Literary Festival, which has made a return for Jamaica 50. From left are Professor Kwame Dawes; Justine Henzell, producer of the festival; Colin Channer, founder; Laura Henzell, wife of Jason Henzell (right) who is a director of Jake's in Treasure Beach where the festival will be held.

Jubilation! 50 to spend more time on telling stories through song

"Calabash is the sort of literary festival to whom the label 'literary festival' applies only because there's no neat phrase for 'reggae-fied', rootsy-intellectual, interdisciplinary extravaganza for those who worship words, abhor pretension and believe that 'smart'and 'fun' need not be mutually exclusive."

The earthy, inspirational, daring and diverse programming has always included music since the festival's inception in 2001 and Jubilation! 50 continues the tradition.

The festival founders Colin Channer, Kwame Dawes and Justine Henzell all agree that stories must be told in various forms and one of the most effective ways Jamaicans have told their stories is through music.

Calabash has been embracing that idea and goes further to do so this year.

According to the trio, there is no contradiction in embracing music as an integral part of a Jamaican literary festival.

Two very different styles of music and performance yet both uniquely Jamaican in their intensity.

Neither band has performed in Treasure Beach before and they are excited to bring their music, not only to the international Calabash audience, but also to the breadbasket of St Elizabeth.

Admission to the concert is free as will be the case for all Calabash activities.

The Admiral is South Africa's leading reggae DJ and has been spinning Jamaican music for more than 16 years, yet Jubilation! 50 will be the first time the Admiral has ever visited Jamaica. Cala-Clash on Saturday night will give him a chance to showcase his love and knowledge for reggae music.

The Sunday afternoon of the festival is always a celebration of the lyrics of Jamaican music and this year the incomparable team of Wayne Armond, Ibo Cooper, Steven Golding and Seretse Small will take us on an acoustic retrospective of the last 50 years of Jamaican music.

From ska to dancehall, these talented musicians know the depth and breadth of our music and will share those loved songs and stories on a stage by the sea. There is nowhere else to be on that afternoon.

More information on the programme and participants may be found at www.calabashfestival.org and the Calabash Jamaica Facebook page is great resource for all things related to the festival.