Illegal Poet launches into UK governance of Turks and Caicos 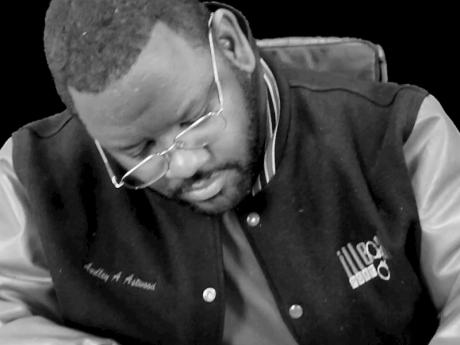 Illegal Poet caught in the middle of penning his missive to JAGS in the video 'Dear JAGS'. 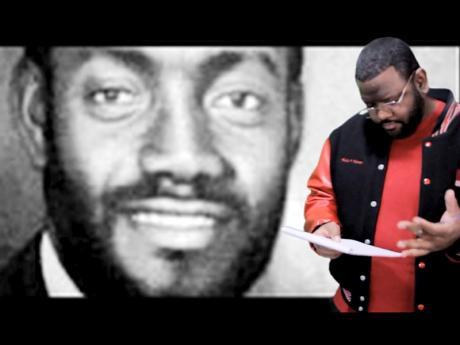 Illegal Poet, Audley Astwood (right), reads 'Dear JAGS' while a photo of his hero, James Alexander George Smith, first premier of the Turks and Caicos Islands, is in the background.- Contributed
1
2

WESTERN BUREAU:Even as he embraces the moniker 'Illegal Poet', there is nothing criminal about the man whose Turks and Caicos Islands (TCI) birth certificate bears the name, Audley Astwood.

Legally, Astwood has produced a spine-tingling five-minute poetic documentary depicting the modern-day injustices his people have been subjected to under British rule. The British took back the leadership of the TCI in 2009, ousting former Premier Michael Misick, who was accused of massive corruption and mismanagement. Misick is currently seeking asylum in an unknown territory.

Astwood's latest work, tagged 'Dear JAGS', which has an agonising, yet catchy tone to it, charges that the British came under the guise of being 'saviours', to save the colony from its previous leaders, but now "seem hell-bent on trying to enslave us. No more whips and chains this time. This time they have shackled the people's minds".

Denied free and fair elections since Misick was ousted, the Illegal Poet writes about his discontent to the late James Alexander George Smith McCarthney (JAGS), the island territory's only national hero and first chief minister. JAGS died in a plane crash in 1980.

The Illegal Poet in his sing-song 'Belonger' Caribbean voice, starts out with, "Dear JAGS, many things have changed since you left. It seems as if our country is on its last breath. When our country was about to be dismantled. I tried to take up your mantle.

Astwood's work far outweighs the mantle he tried to take up in 2009, the man who is no stranger to civil-rights activism, who has over years combined the political, the personal and the hilarious in his signature blend of spoken word, is sending a strong message to the interim government in his country.

"No matter how wrong the last elected government was or might have been, it does not justify what the UK government is doing to the people of the Turks & Caicos.

"Intimidation, whether directly or indirectly will not deter me from my stance because I am loyal to the Turks & Caicos," he tells Sunday Gleaner Entertainment.

Astwood says after he moved to the United Kingdom (UK) his country was stripped of its constitution and that there were many failed attempts by himself and others to get his people to unite and speak out against the many injustices taking place after direct British rule was imposed on the territory.

"Coming to London was all about getting to experience first-hand a country that preaches and goes to war to ensure countries get democracy but, at the same time, deny the people of the Turks and Caicos the very same liberties ... The right to free and fair elections."

Astood in Dear JAGS, speaks of a people still in mourning; still in grief, "Your leadership has and may never be replaced. Many of your people have been displaced. This country is no longer ours We've been stripped of our constitutional powers. Puppets gave credibility to the invaders regime, thereby, helped to killed your dream."

The footage used in the video depicts a number of protests against direct UK rule in the TCI. "The people in the video were not hired by me, I simply recorded what was actually happening in the Turks & Caicos that many in the UK government did not want people outside of TCI to know about," he argues.

Astwood says he is hoping the video inspires his people to stand up and speak out about the injustices they suffer under direct UK rule, and that it also creates regional and international awareness about the need for the people of the TCI to decide their own fate.

There is far more to the Illegal Poet, than 'Dear JAGS', whether he is taking a stance on child or spousal abuse, making daring and insightful attacks on Santa Claus, O.J. Simpson or rhyming off his incisive spoken-word rants, his unique Caribbean perspective, and unusual sense of humour have been winning him a loyal following.

Astwood studied broadcasting and management in Ft Lauderdale. It was in the United States where he made the transition from an author to a spoken-word artiste in August of 2004.

He has published two volumes of poetry 'The Awakening' and 'Illegal Thoughts', which have been studied in elementary, secondary and tertiary institutions in the TCI.

A third volume, titled 'Illegal Poet', is an extension of his debut CD and is expected to be published soon.

He has performed in Canada (Toronto and Vancouver), the United States (US): Las Vegas (Caesar's Palace), New York (Nuyorican Poet's Café), Florida and Georgia (Apache Café) the United Kingdom (London and Brixton) and several countries in the Caribbean, becoming known as the poet with his own signature.

He has also made several local radio and TV appearances in his home country of the TCI.

Illegal Poet recently made his US TV debut in Baltimore, Maryland in April of 2008 on The Poets' Lounge.

And there is nothing he wants more than seeing his country returned to its 2006 constitution, a better working relationship with the UK government, with employment laws designed to protect the Belongers, strictly enforced.