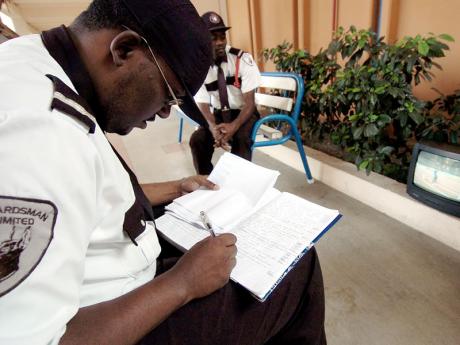 Columnist Orville Taylor says the willingness of successive administrations to allow the characterisation of security guards as contractors is immoral, and a sign of government incompetence.- File

Pay attention to the comments by the minister of finance and the earlier one by the minister of labour and tell me if there is any difference between what the Jamaica Labour Party (JLP) said three years ago and what the People's National Party (PNP) is saying now.

The Bruce Golding-led JLP declared that government workers would not get their expected seven per cent wage increase and other benefits not yet negotiated would not go on the agenda. Turning tail on a campaign promise, then Minister of Finance Audley 'Man a Yaad' Shaw reiterated the position, and Labour Minister Pearnel Charles, speaking from the white side of his head, reinforced the dictate.

Now, Minister of Labour Derrick Kellier, before public-sector negotiations begin, jumped the gun faster than Usain Bolt and said no increases this year.

Clearly not speaking in isolation, Kellier must have bounced it off Finance Minister Peter Phillips who, as government thread bag holder, made the same statement later. It is easy to blame the impending International Monetary Fund (IMF) agreement because, as I have warned since it returned to the agenda in 2009, the Fund is anti-labour. However, in Workers' Week, the use of the IMF as scapegoat is convenient, but is it true that the fund makes our government turn against the working class?

Let me whisper a well-known but hardly admitted secret: there has only been one pro-worker government in the history of this country, and that was from 1973 to 1977. All other governments and oppositions have failed the Jamaican working class, and the trade unionists in Parliament have been conspirators in the betrayal too.

In 1938, when the PNP was formed, Alexander Bustamante, the 'hero' of the Jamaican worker uprisings that year, was on the platform. When he left in 1943 to form the JLP, one would have thought that workers would have seen dramatic changes on their behalf. Then, when he won the first democratic election under universal adult suffrage in 1944, the same year the IMF was formed, the newly established United Nations (UN), via the International Labour Organisation (ILO), provided a menu of human and worker rights to guide his government.

However, Bustamante, who did not lead the 1938 uprising and was not a practising trade unionist when it started, might not have been as pro-worker as one believes. Few know that Busta was not involved until St William Grant foisted him on to the protesting workers after he had been rejected as a wannabe mediator by the ruling class.

Furthermore, the most heroic thing Bustamante is fabled for having done is baring his chest and daring frightened black police constables to shoot a powerful, money-clad brown man, related to the most imposing lawyer in the country. His tenure as chief minister between 1944 and 1955, and prime minister from 1962 to 1965 produced a Holiday with Pay Law in 1947, which was not given any teeth and an 'essential services law' which restricted union activity.

He also formed the National Workers' Union (NWU) in 1952 as an arm of the PNP, but not before he had 'purged' his party of 'communist' elements: brothers Frank and Ken Hill, trade unionist Arthur Henry and the only person who has accurately and honestly written and analysed the history of Jamaica's workers' struggle, Richard Hart. Manley did little to improve the lot of workers in his stint as chief minister between 1955 and 1961. One statute enacted was the Women (Employment of) Act of 1956, which, still in force, outlaws women working at night and more than 10 hours per day.

It is true - the prime minister is working illegally today.

Then, when the JLP led the country from 1961 to 1972, it only introduced the National Insurance Scheme in 1965 and, incredibly, Norman Manley opposed this historic innovation.

Far from being the perfect labour leader, Michael had lots of chinks in his armour. True, his government passed the Holiday with Pay Orders in 1973, the Employment Termination and Redundancy Payment Act (ETRPA) in 1974, the Labour Relations and Industrial Disputes Act (LRIDA) in 1975, and the Maternity Leave Act in 1979, among others, the most pro-worker laws passed in Jamaica's history.

Yet, the ETRPA and the LRIDA are not his brainchildren. Headed by Shearer, desperate to stave off defeat in the polls, the JLP introduced both bills in 1971. The PNP, putting politics before national or workers' interests, opposed the bills and was particularly strident in challenging the LRIDA. Hypocritically, the JLP later opposed the very same LRIDA clauses it had introduced.

Then, three years after losing in 1980, pushing the obstinate Edward Seaga, he called for his resignation. In two blinks of an eye, Seaga called the general election, and Manley, protesting Seaga's dictatorial approach, abandoned Parliament, thus giving him more power. Only the logic of Seaga himself, who tried the same leadership style and expected different results in three consecutive elections, is comparable. The decision to boycott the election in 1983 was very un-Manley, and giving the JLP a dangerous total majority, was surpassed by the ludicrous tea meetings the PNP held at a prominent hotel. Even a small minority in Parliament is better than none, and the PNP might not have even lost the election despite it being held on the old voters' list which excluded many of the new pro-Manley voters.

And Seaga, though not a trade unionist, had Shearer, the BITU president, as deputy prime minister. And what did One Don do? He kept the wage guidelines and squeezed the resistance out of the labour movement. Then when the workers protested with a general strike in 1985, Seaga broke and gelded the leadership, punishing hundreds of Jamaica Public Service Company (JPS) and Fire Brigade workers, among others.

By the time Michael returned to power in 1992, not only had he changed from wearing his Kariba bush jackets, but he dressed like a Wall Street banker, like pro-capitalist Seaga. His last hurrah, a glimpse of his former self, was the passing of his initiative, the Employment Share Ownership Plan (ESOP) Act in 1994.

Michael's baton was passed to P.J. Patterson, who, with the exception of his throwback pretty shirts, showed little to remind workers of the 1970s. In fact, although the IMF wage ceilings were finally removed, by the time the new millennium had begun, the lack of protection for workers was fully exposed, with the loss of tens of thousands of unionised jobs. P.J.'s government took action against striking warders and did to them what Seaga had done to the JPS and fire brigade.

When finally, in 2001, the attempt was made to amend the LRIDA, the draft was as porous as a vagrants' drawers, and perhaps intentionally. The gaps were pointed out in a study done for the ILO in 2001 but ignored by government. Interestingly, it is the JLP, with Pearnel turning and switching to his black side, which delivered the amendment to the LRIDA to allow non-unionised workers recourse when arbitrarily dismissed, 25 years after the gap in the act was exposed. Furthermore, it modified the ETRPA to reduce employers' corrupt practices when redundancy is contemplated.

Nonetheless, the shame regarding contract work is the biggest stain on the Houses of Parliament and the culpable trade unionists abiding therein. At present, thousands of Jamaican workers, especially security guards, have no protection because their immoral employers call them contractors, and an impotent Government with ineffective legislation doesn't stand up to protect them. In Workers' Week, with a trade unionist that always has the prime minister's gaze; another who heads the BITU; and one who led a PNP-affiliated union for years, let us see who will finally put workers first.