Towards a sustainable energy future and economy 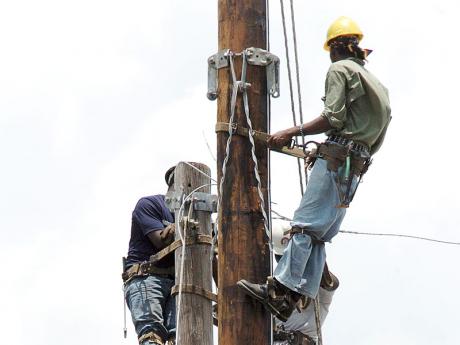 Workmen atop a Jamaica Public Service Company pole. Jamaica must revamp its energy framework if the country is to compete gainfully with rival nations which benefit from cheaper fuel sources.- File

Energy is set to wreck the weak CARICOM. Energy is a ball and chain hobbling the Jamaican economy. Energy, if it is true that human action is the principal cause of global warming and climate change from global warming, is set to wreak havoc upon the entire planet.

Omar Azan, a former president of the Jamaica Manufacturers' Association, in a blistering speech last week, said government-subsidised electricity cost in Trinidad & Tobago was giving an unfair advantage to that country's manufacturers in CARICOM trade. At US$0.05 per kilowatt-hour, the cost of electricity in T&T is some six times lower than the cost of electricity in Jamaica. Azan has threatened to lock down the country over the issue. Others have been openly advocating that Jamaica should withdraw from CARICOM.

Meanwhile, a powerful coalition of private-sector companies has been shouting, through expensive advertisements, that the cost of electricity has increased by 135 per cent since 2001 and advising us to "pull the plug on high light bills". Exactly how to pull the plug has been left unspecified, like the Azan lockdown of the country.

Citizens United to Reduce Electricity (CURE) has gone the unprecedented route of taking action in the Supreme Court to test the legality of the Jamaica Public Service Company (JPS) all-island monopoly. CURE is asking the court to declare null and void the licence granted in 2001 by the energy minister and renewed in 2007.

The licence, according to the claimants, is in breach of Section 3 of the Electric Lighting Act of 1890. CURE attorney Hugh Wildman is arguing that under the act, and in particular Section 3, the island is broken up into areas over which the responsible minister may grant a licence to either the local authority or a private company to generate and transmit electricity.

"What is not permissible under Section 3, or any other section of the act, is an exclusive licence over the entire island. A licensee or undertaker is confined to the particular area over which a licence is granted," Wildman submits to the court.

The new head of the JPS, Kelly Tomblin, has fired back, has thrown down the gauntlet, in Gleaner reportage.

If the Jamaican Government wants to break the monopoly on electricity distribution, the best way to do it is to buy out the majority owners of Jamaica Public Service Company Limited (JPS), Ms Tomblin says bluntly. "Basically, the Government can buy it back from us and then they can liberalise it, and we are certainly open to that. We do not want to stand in the way."

The JPS's current monopoly licence runs for another 15 years to 2027. We remember Phillip Paulwell and the liberalisation of telecommunications, and he's back.

Everyone's cure for the nation's ills includes fixing the problem of the cost of energy. Last Sunday, The Gleaner Council of wise persons ran the following list of things to focus on "to enable the business environment for sustainable economic growth":

Enhanced use of information and communication technologies.

The People's National Party (PNP), now in government, in its campaign manifesto noted the obvious that:

"The high cost of energy has been a debilitating factor for households and businesses alike and has impacted negatively on the country's productivity and competitiveness. Electrical energy, in particular, is perhaps the most crippling and inimical factor affecting productivity, competitiveness, economic growth and employment."

The party promised that, as Government, it would "give effect to the policy to liberalise the energy sector. In this context, the role of the Government will be to provide a modern regulatory framework for the sector aimed at stimulating and facilitating private-sector exploration and the provision of alternative energy sources".

The administration would be committed to "a diversification strategy" as an essential element in the reduction of the high cost of energy to include the exploration and exploitation of energy options such as:

And the PNP administration would "move immediately to ease the burden of the general consumption tax (GCT) on electricity bills". As it turned out, when the calculations were in, the 'burden' was light and its removal would not substantially affect the cost of electricity to the majority of consumers.

Over the medium to longer term, a PNP administration, the manifesto said, would "be actively involved in the following:

Giving support to the development of viable renewable-energy projects.

Upgrading existing legislation affecting the electricity sector and seeking to alter, to the extent possible, the terms of the JPS electricity-supply arrangements, to enhance the national interest, to encourage investments by the providers while providing a fair return to them.

Expanding the use of solar energy.

Reviewing and strengthening the OUR to more effectively protect the public interest, while recognising the need for investment in the sector.

Studying the possibilities of introducing nuclear energy as part of the energy-supply mix over the longer term.

Establishing a National Energy Council to address relevant issues and affairs of stakeholders.

Taking the necessary steps to realise earnings from carbon credits.

Reactivate efforts to explore for oil and gas.

Reviewing the status of modernisation and expansion proposal of the Petrojam refinery with a view to early implementation."

Fiddling with 'liberalising' the electricity sector, fiddling with the rate of the GCT on electricity, and fiddling with conservation measures, as necessary as these may be, won't, of course, resolve the energy crisis confronting this country. The fundamental issue is the cost of the energy source. Jamaica relies on oil for 90 per cent of its energy needs, and prices have jumped by some 350 per cent over the last five years and are set to continue the upward spiral.

The International Energy Agency estimates that oil, a non-renewable energy source, has reached its peak output this year. Other non-renewables will follow. Our payments for the commodity account for the second-largest outflow of foreign exchange after debt servicing.

It was more than timely, then, that the country's University of Technology and the Embassy of the Federal Republic of Germany, energetically led by Ambassador Josef Beck, teamed up last week to stage an exposition and conference on 'Building a Sustainable Energy Economy'.

Germany was among our very first diplomatic partners, having established diplomatic relations with Jamaica on Independence Day 1962, and is quite proud of it. The country has become a powerhouse in the use of renewable energy, something which their poster exhibition underscored. The Bundestag has just voted near unanimously to phase out nuclear energy by 2022. And the country is pushing for an 80 per cent use of renewables by 2050. Minister of Energy Phillip Paulwell has upped the Jamaican target from 20 per cent renewable by 2030 to 30 per cent.

UTech itself has made substantial commitments to sustainable energy. The School of Engineering has an Energy Unit, and the university has appointed a highly experienced director of sustainable energy. Last year, a small team of UTech energy engineers brought piped water to Carron Hall in western St Mary, using solar energy captured by photovoltaic cells for pumping water 2,000 feet up out of a valley and into an elevated storage catchment from which gravity flow distributes the water to the community. The university is eager to build similar systems across Jamaica for small-scale rural water supplies powered by the sun.

UTech, with partners, has recently won an ACP/EU Research Programme for Sustainable Development research grant, its largest ever, to develop a solar-powered process for producing hydrogen, which can be used as a low-cost fuel for cooking as an alternative to liquefied petroleum gas.

The prime minister delivered the keynote address at the opening ceremony for the Sustainable Energy Conference & Exposition on Wednesday evening, and her minister of energy was a panellist at the round table the following evening. Both laid out the policy direction of the Government for reducing energy costs and for building a sustainable energy future, to ringing audience endorsement.

The round table, for which I served as moderator, with its mix of political leadership, energy expertise, development-banking perspectives, the voice of the sole provider of electricity and that of the utilities regulator, explored options for a sustainable-energy economy. Nothing new, really. The point is to decide on preferred options, none of which is perfect, balancing things like costs, sustainability and environmental impact, and take action.

Jamaica's carbon footprint is so tiny, and global warming and climate change fossil fuel-driven or otherwise, are so large-scale that there is little that this speck of country can do about them. What we can and must do something about is the raw fact that oil is draining off the second-largest amount of our foreign exchange and delivering to us uncompetitively high-priced electricity.