Trim the fat, Peter! Phillips must face up to job cuts 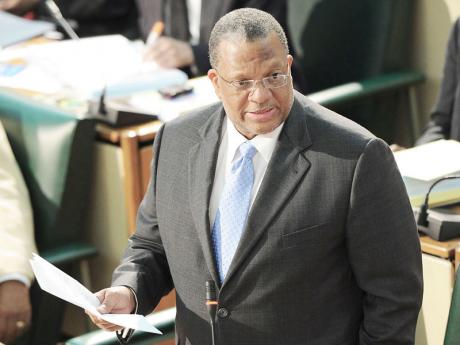 During the parliamentary debate on his expenditure budget, Finance Minister Dr Peter Phillips was his usual statesmanlike self when he told his House colleagues that "as a Parliament, we can't all be for more expenditure and at the same time be for the paying down of the debt". He also said, " ... If steps are not taken to cut the debt, we will be mortgaging the future of the country and future generations."

In calling for the cooperation of ALL critical stakeholders, including unions, public-sector workers and civil society, the finance minister asserted, "This is the heart of the challenge that we face as a country, and it requires great clarity from all of us to accept that this is what Independence ... really means: making the hard choices in the discharge of our sovereign responsibility."

In breathing well-needed life into the budgeting process, Dr Phillips directed the parliamentarians into strategic-thinking mode by forcing choices which will require aligning scarce resources around those choices. Dr Phillips' approach blunted the usually aggressive Opposition Spokesman Audley Shaw, who publicly supported a wage freeze for state workers. This closing of ranks in Parliament has made it much easier for the Government's lead negotiator, Minister Horace Dalley, to take the message to the unions.

In the same manner that Dr Phillips gave choices to his parliamentarians, he must do likewise to the public-sector unions to change their unidirectional thinking. The utterings by the unions represent a simple choice between a wage freeze and an increase.

However, as Dr Phillips said in Parliament, "If we are to add to one head, we must take from another." The unions must understand there is a wider choice between a wage freeze/job protection and a wage increase/job losses. This multidirectional thinking will allow the unions to take a more sober perspective on the Budget and, consequently, on their wage negotiations

The finance minister made it clear that poor economic performance could not continue, when he remarked: "It is absolutely imperative that we get the economy growing at a faster pace than we have achieved over the last 30 years. The foundation of that increased rate has to be laid now."

Impact of reform on growth

The role of the public sector is to create an enabling and supportive environment in which private (local and international) firms can create employment, provide fair returns to their investors and generate adequate surpluses to fund social programs. In the short term, this includes improving the ease of doing business; enabling physical infrastructure and communications; ensuring effective regulation; promoting investment, fair trade, opening export markets; and protecting the most vulnerable.

Long-term sustainability can be assured, inter alia, through a healthy, well-educated, socially conscious population and a clean, sustainable and safe living environment. All these are to be facilitated by the public sector as it delicately balances spending to meet short-term requirements and investing for the long term.

To do so requires a lean, mean and high-performing public sector. Put another way, the public sector is the real muscle driving the country's growth and development. While some fat is necessary to protect the muscle, too much fat suffocates and renders the muscle ineffective.

This is precisely the situation in which we find the public sector today, not because of the public-sector employees, but driven by the failure of successive administrations to take necessary, yet politically unpopular decisions.

As Finance Minister Phillips said last Tuesday, "We have to find room to protect the most vulnerable and marginalised in the country by increasing expenditure in the targeted social sectors and programmes." This room, I believe, can be found by strategically trimming the excess fat in the public sector.

There are many persons who add much value and need to be motivated and adequately compensated. There are, however, many others who add little or no value, and, in some cases, negative value by providing bureaucratic lawyers countering those who add value. The result has been the slow pace of economic growth and the inadequate room to protect the vulnerable, as articulated by Dr Phillips.

The problem with Dr Phillips' initial expenditure Budget presentation is the idea that public-sector reform should not involve cutting the size of the sector or the wage bill, but simply make doing business easier. This, I believe, is a cop-out by Dr Phillips and his Cabinet colleagues; and mirrors the procrastination of former Prime Minister Golding, who commissioned the Public Sector Transformation Unit (PSTU) to prepare reform recommendations; and former Prime Minister Holness, who also got cold feet over the matter.

Instead, the parliamentarians should, individually and collectively, realise that by trimming the public sector, providing some protection to those that are separated, granting increases to those that remain, and providing greater protection to the most vulnerable in society can all be accommodated within the recently laid Budget.

Based on the PSTU's report, I estimate approximate 10,000 persons can be separated in the first phase this year, resulting in a gross savings of some $12.3 billion, which does not factor in redundancy costs. I recommend paying redundancy costs over a period, so the maximum received monthly is one-third of one's most recent salary, and the minimum time for receiving such payments is one year. This would require approximately $4.1 billion during the first year. Those remaining in their jobs can then be granted an average five per cent increase amounting to about $6.6 billion.

The remaining $1.6 billion can be used to expand the PATH - the Programme for Advancement Through Health and Education - by targeting the lowest decile below the poverty line. This amount can feed approximately 30,000 at the minimum calorie requirement-based food basket for an entire year.

While some 10,000 public-sector employees will be dislocated and lose two-thirds of their income; another 110,000 or so will benefit from increased wages. Additionally, the lives of 50,000 of the most vulnerable will be more balanced, indicating a better option than doing nothing.

I, therefore, urge all parliamentarians to take a hard look at the choices facing us at this juncture in our 50th year of Independence and make the correct decision. Leaving the public sector as is cannot be an option; however, reducing its size and that of the wage bill will result in greater public-sector efficiencies; motivated, performing staff; basic protection of those who are separated; and substantial increases in the protection of the most vulnerable.

There is scope for a win-win situation for Dr Phillips' mandate to achieve growth while reducing debt - and Prime Minister Portia Simpson Miller's vow to better balance people's lives. Bold leadership on this front will reap both short- and long-term benefits for the country.

Robert Wynter is managing director of Strategic Alignment Limited, which facilitates organisational transformation and leadership development. Comments are welcome at columns@gleanerjm.com and rob.wyn@hotmail.com.