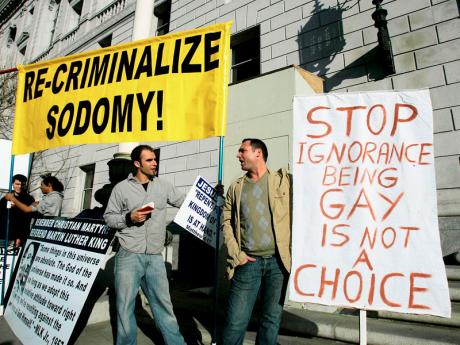 In this March 4, 2008 file photo, Luke Otterstad (left) and Kerry Coles argue over the gay marriage debate outside of the California Supreme Court in San Francisco. A flurry of political activity in states such as Rhode Island, Illinois and Colorado followed President Barack Obama's declaration of support for gay marriage, which has emboldened activists and politicians on both sides of the issue.- AP

When the most powerful man in the world declares his support for same-sex unions, a seismic jolt takes place. An incalculably important victory is scored for the gay community. That President Obama could feel it riskworthy to take that gamble just months away from an election indicates how much the ground has shifted.

Well-known gay journalist Andrew Sullivan, in his provocatively titled Newsweek cover story, 'Barack Obama: The First Gay President', captures the significance of Obama's support for homosexual unions: "This, by any measure, is an astonishing pace of change in one presidential term. In four years, Obama went from being J.F.K. on civil rights to being L.B.J.: from giving uplifting speeches to acting in ways to make the inspiring words a reality."

In a revealing poll, the authoritative Pew Research Centre reported on April 25 that there is more support today for gay marriage than there was in the 2004 and 2008 elections. "In the last two presidential campaigns, there was far more opposition than support for gay marriage. But today, opinions are divided, and there is as much strong support as strong opposition to gay marriage (22 per cent each." Pew said that since 2004, "there has seen a broad-based decline in opposition to gay marriage. While, in 2004, under-30-year-old Americans were closely divided on this issue (48 per cent opposed, 45 per cent favoured), today young people favour gay marriage by more than two-to-one (64 per cent to 30 per cent). Opposition has declined by the same percentage points - 18 per cent - among those 65 and older." Interestingly, support for gay marriage among Democrats and Independents has also been growing.

Americans - including African-Americans - have been evolving along with Obama. For Obama to energise his political base, which has become disillusioned with him, he had to pull for a galvanising wedge issue like gay rights. Young Americans are overwhelmingly positive towards gay marriage and want a new cause to fight for. "The under-30s were looking worryingly apathetic, especially compared with 2008. This would fire them up," says Andrew Sullivan in Newsweek.

Plus, he points out, one in six of Obama's fund-raising bundlers is gay. Money is almost everything in American elections.

Hence, it makes it a rationally calculated gamble to go for this wedge issue. Plus, it takes away some attention from the economy.

It is noteworthy, too, that even conservatives have been 'evolving' on gay marriage. Some are not willing to expend as much disgust capital on this issue as they used to. One could not have failed to note how tepid Mitt Romney's response was to Obama's ABC interview. He simply said, calmly, "I have the same view of marriage I had when I was governor. I believe marriage is a relationship between a man and a woman."

Astute media critic Howard Kurtz, in a May 10 Daily Beast piece, noted that Romney's response "was anything but inflammatory;" going on to say: "The unofficial Republican nominee supports a constitutional amendment to ban same-sex marriage but almost never talks about it." This is another indication of just how much the ground has shifted on this sensitive culture war issue.

Some conservative voices have been urging Romney not to be left behind 'on the wrong side of history', and the reputable conservative Wall Street Journal, in a May 9 editorial, gave "congratulations to President Obama for matching public policy with what everyone already knew were his private beliefs". The Journal concluded: "American public opinion on unions between same-sex couples ... is changing, with support growing. Barack Obama and Mitt Romney won't arrive at a marriage of minds on this subject, but the issue shouldn't decide the election, and we doubt it will."

What a choice conservative evangelicals have in this November election: Choosing between a gay-marriage advocate and an adherent of a non-Christian cult, as they see Mormonism. Conservative African-American Christians have a cruel choice, too: between one advocating sodomy and the other who is anything but pro-poor and progressive. Obama is gambling on the fact that conservative African-Americans will sigh and vote Democrat, thinking they simply have no choice.

But others think Obama will lose his gamble as conservative African-Americans, Latino Catholics and White Anglo-Saxon Protestants (WASP) rally together to vote on a culture-war issue.

A significant and, in my view, irreversible cultural shift has taken place against conservative Christian values, and that Humpty Dumpty can never be put together again. The fact that so many in the Christian Church have capitulated to a sentimental experientialism and emotionalism, as well as a vulgar materialism under the guise of the health and wealth, prosperity gospel; and that Christians are moved more by heart than by head and have devalued intellectualism, have rendered them totally unprepared for this massive cultural assault.

The fact of the matter is that the most durable arguments against gay marriage are religious, primarily biblical. The Bible remains that last bastion of 'bigotry' and 'prejudice', as many see it. Its texts contain the most lethal weapons against homosexuality.

But the Bible has been under sustained and increasing attack, with increasing numbers of thinking Christians abandoning the Church, and many pastors themselves privately rejecting the Bible as the infallible Word of God. Many have become atheists while remaining in the pulpit. Today, if you attend an accredited, reputable Christian seminar, you are likely to find enough reasons not to believe that you can trust the Bible or take it literally. So not only have secularism and postmodernism significantly undermined conservative Christian premises, but biblical study itself, as a discipline, has all but destroyed faith in the Bible.

Unlike previous eras when there were many formidable intellectuals and scholars impacting the public square, today, sceptical scholars from the Church itself have cut the rug from under the feet of Bible-believing Christians.

"I know many of my Republican friends take, literally, words written in scripture 2,000 years ago. But I take literally words written in the Declaration of Independence 200 years ago that guarantees the right to the pursuit of happiness," says Mark McKinnon, strategic consultant to Republican bigwigs, including George W. Bush and John McCain in the May 10 issue of Daily Beast.

That's why Mercer University dean of law, Gary Simpson, argues in his paper, Religion by Any Other Name?: Prohibitions of Same-Sex Marriage and the Limits of the Establishment Clause, that religion effectively is the only grounds for opposition and those who are pushing same-sex prohibition are really advancing a religious view - which is contrary to the notion of separation of Church and State.

Secular arguments against same-sex marriage are extremely weak. For example, the argument about procreation and the obvious inability of gay people to procreate. It is nonsense to say that gay marriage would obliterate procreation. Besides, there are many couples in the West who are electing not to have children. We marry infertile people, people beyond child-bearing age, so why persist with the view that procreation is constitutive of marriage? I have encountered no secular argument against same-sex marriage or homosexuality which is even minimally cogent.

There is a brilliant paper published by the University of Minnesota Law School, written by David Carpenter, which surgically debunks the secular arguments against gay marriage. It's titled Bad Arguments Against Gay Marriage.

A highly reasoned and extensive essay putting forward the conjugal and more conservative view of marriage which I recommend is 'What is Marriage?' in the winter 2011 issue of The Harvard Journal of Law and Public Policy. A major challenge for Christians - and this was highlighted in that front-page Observer story on Wednesday about that couple who were barred in England from fostering a child because they teach that homosexuality is disordered - is that Christians won't be able to discriminate if gays have full civil rights. That is, just as you are not allowed to refuse to rent property or offer services on the basis of race or gender, so you would not be able to refuse to rent or give services to gay couples.

Ian Boyne, a veteran journalist, is the 2010-11 winner of the Morris Cargill Award for Opinion Journalism. Email feedback to columns@ gleanerjm.com and ianboyne1@yahoo.com.