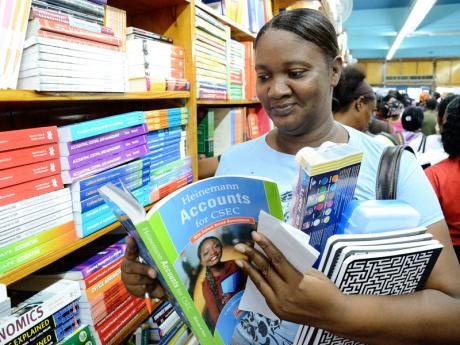 A parent has her hands full with books during back-to-school shopping at Kingston Book Shop downtown. Local printers are peeved that many books used in school curricula are imported, instead of being produced in Jamaica.- file

Recently, there has been much discussion concerning Jamaica's trade policy. The underlying assumption is that exports are good and imports are bad. The proponents of this argument use the trade deficit with CARICOM, and in particular with Trinidad and Tobago, to demonstrate that something is awfully wrong and that Jamaica is disadvantaged.

This is a fallacy. A trade deficit with a single county, or a region, by itself, is not an indication of anything being wrong. A country is like an individual: it trades so as to increase its well-being.

I run deficits with my gas station, my doctor, my dentist, my barber, my supermarket and almost everyone I trade with except my employer. My employer is the only person with whom I run a surplus. It is not necessary for me to have balanced trade with my gas station or my doctor or anyone else; they do not need to buy goods or services from me equal in value to what I buy from them.

In fact, the desire to remove the constraints of balanced trade with everyone with whom an individual trades led to the creation of money. If individuals always engaged in balanced trade, we would have barter - with all its inefficiencies - and have no need for money. What is required is that my overall trade is balanced, i.e., the sum of my deficits and surpluses balanced.

What is true for an individual is also true for a country. It is not necessary (or even desirable) for Jamaica to have balanced trade with all its trading partners.

A bit of name-calling has been taking place between sections of the private sector, with a member of the manufacturing sector referring to members of the Chamber of Commerce as margin gathers. The term 'margin gathers' was used pejoratively. The truth is that all business activities are margin gathering.

A manufacturer who combines raw material, labour and capital to make something is creating an output which is worth more than the value of the inputs, and he is collecting the difference in values, or the margin, for himself. A distributor who moves an item from which it has less value to where it is more valuable, collects the margin between the two valuations.

It is a mistake to think that one type of economic activity is more important than another. The old communist regimes viewed services differently from goods. This was a mistake. All businesses are seeking the same objective: the collection of margins. The means may be different, but the objective is the same.

A common fallacy which many business people seem to believe, and unfortunately have managed to convince policymakers of, is that what is good for their particular business is, by extension, good for the overall economy. An economy is not simply the sum of its parts. What is good for one business might be detrimental for other segments of the economy, including other businesses.

The tax code is in the mess that it is because, over time, whether formally through misguided attempts to use development plans as a substitute for sound economics, or informally through access to ministers, certain businesses were singled out for special treatment - tax holidays and/or special incentives. The idea was that these incentives would lead to development of these business/sectors and, by extension, the economy.

Some of these businesses did grow, but the tax structure which acted as an incentive to them simultaneously acted as a disincentive to other businesses. The net result is that the economic growth rate has been anaemic, at best.

The manufacturers make a case for the printing of school books in Jamaica. They even try to capture the support of labour and politicians by saying how many jobs would be created. Even if this were all true, there would still be hurt inflicted. The issue is framed as a tussle between Jamaican and Trinidadian manufac- turers. This is a mischaracterisation of the choices which Jamaican public policy can affect.

The purpose of spending on school books is to provide education to Jamaican children. It is not to employ Jamaican workers or make Jamaican businessmen wealthier. Should the Government add another objective, e.g. making the Jamaican printing industry more profitable (i.e., protecting the local printing industry), it must trade off some of the first object, the education of Jamaican children, for the second, the enrichment of some Jamaican business persons and workers.

If the amount of money that the Government has to spend on school books is fixed, and if Jamaican printed books are more expensive than books printed in Trinidad, a policy of 'buy Jamaican' would lead to fewer books being bought. This means that fewer Jamaican children would be educated.

Allowing Jamaican businesses to supply books at 10 per cent higher than foreigner competitors can means 10 per cent fewer children will receive books. Trade-offs are made in public policy every day. We are not surprised that a group of business persons would be advocating their own self-interest. Policymakers and the public, at large, need to understand what the trade-offs really are, not what one interest group or another claims them to be.

The argument has been made that there is something wrong with Trinidad having cheaper energy than its CARICOM partners, and not being willing to share that cheaper energy with them, while expecting CARICOM markets to give preferential treatment to Trinidad-made goods vis-a-vis third-country suppliers. This is not an unreasonable position.

This issue is best dealt with under the ambit of competition law. Unfortunately, the competition provisions of the Revised Treaty of Chaguaramas do not explicitly outlaw state aid as the European Competition provisions do within the European Union (EU). State aid is when a member government of a common trading area gives assists its business enterprises in a way which does not benefit enterprises of other member states. Within the EU, it would be illegal for one country to assist its national airline, thereby giving it an advantage in competition with the airlines of other countries within the Union.

Advocating for such a provision within the Caribbean competition architecture, and the strengthening of any provision which prevents a private company within the region from trading dissimilarly with similar parties, would seem to make sense. If unequal treatment of companies trading within CARICOM by CARICOM governments or private firms within Community were prohibited, the concerns of the Jamaican manufacturers, that their Trinidadian competitions were being assisted by differential pricing, would be addressed without inflicting additional damage on Jamaican consumers.

Peter-John Gordon is a lecturer in the Department of Economics, UWI, and former chairman of the Fair Trading Commission.