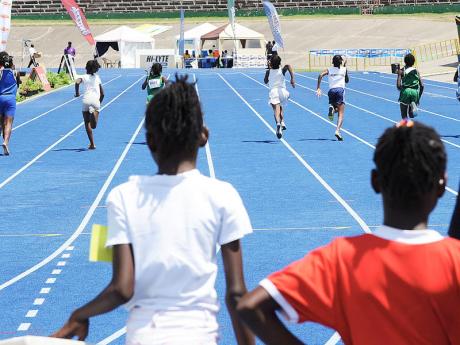 Girls waiting to take part in Heat 9 of the Class 3 girls 100m watch runners in Heat 8 during the 2012 Primary Schools Athletics Championships at the National Stadium two Thursdays ago.- Ian Allen/Photographer

One of the key factors influencing this about-face is the intensity and efficiency of the business of importation, where the school group brings youngsters into high schools based on sporting ability in an attempt to influence the outcome of inter-school events.

Importation/recruiting metamorphosed from an art into a science. The strategies used by importing schools are now much tighter, more deliberate, more focused and sophisticated. Some schools bring in youngsters primarily at grades seven and 12. Bringing youngsters in at grades seven and 12 makes it much easier to cover one's tracks, makes it much more difficult to prove importation.

When a youngster is brought in at grade seven, even if he/she does not take GSAT (many are brought in from junior secondary schools) or has a much lower rank than that required to get into the school normally, his status is much easier to disguise than if he came in at grades eight, nine or 10, since it would be reasonably assumed that he/she had qualified for the school like most other youngsters.

The school will declare that since the youngster was there from grade seven, he/she would have absorbed the culture of the institution and, hence, would have become acceptable. They will also point to the relatively few youngsters who eventually do well academically as justification for their actions.

Notwithstanding the official statement that placement in the GSAT and, hence, allocation of space in our high schools, is by computer and based on preference and performance, and the pronouncement by the minister of education as recently as Monday, March 19, 2012, that the 20 or so brand-name schools will not be able to take all high-performing youngsters, the hypocrisy of importation based on sports seems to elude many of us.

Grave injustice is done to the more deserving youngsters, the poor, voiceless, powerless, impressionable, fragile youngsters from struggling households who persevered through very trying circumstances, some living in one room with a host of other persons, having to study under street lights. Though staying focused enough to duly earn a place in the favoured school, they are often overlooked.

Sports importation is institutionalised corruption and injustice. It sends warped messages to our youngsters which are inimical to our social fabric.

Many children do not take part in any formally organised sporting activity until after they enter high school. I was one such youngster. However, having entered the school on the basis of my academic performance, I started participating in sports. The rest is history. Suffice it to say, in football, my talent was discovered, and given the chance and assistance to develop at St George's College, I was offered the opportunity to be the first Jamaican to play football in Brazil, by Olario. I was still playing Manning Cup. I did not pursue it because I wanted to go to university.

We are not exposing and developing as many sports and academic stars as we can. Schools need to unearth and develop home-grown talent in sports instead of importing. The potential is there in our schools, and we must exploit it.

When a youngster is brought in at grade 12, he/she may, indeed, be qualified for sixth form. However, there is a dearth of sixth-form space in Jamaica. The competition, therefore, on an academic level to get into sixth form should be stringent, especially for those coming from outside the school.

The sports recruit, however, will be brought in at the minimal qualification level, thus short-circuiting the system and denying a more deserving student. This is not in the best interests of our children or Jamaica, especially in the knowledge-driven world economy in which we find ourselves.

Sports importation/recruiting corrupts the integrity of the education system by introducing a double standard. Such importation unfairly shifts the benefits of the youngsters' success from the original schools to the importing schools. This makes it much more difficult for the origin schools to develop their sports programme as well as to grow as educational institutions.

Sports importation facilitates the creation of a permanent high-school underclass. If, as we often say, we are genuinely interested in educating all our youngsters, we must do all we can to encourage the growth of all our non-brand-name institutions, since the preferred schools do not have the space to do it all. Taking away their sports stars is a step in the wrong direction.

The youngsters would have developed their talent anyway, as emphasised by Usain Bolt at William Knibb, Asafa Powell at Charlemont, Samardo Samuels (NBA) at Muschett, etc. Les Laing (Dinthill), George Rhoden (Kingston Technical), George Kerr (Knockalva) and many other greats attended schools which could not then participate at Champs and yet went on to be world-class athletes. Jamaica has always had sporting talent which comes to the fore anyway, and even more so in these days of very able, competent coaches, clubs and many developmental meets (leagues) etc.

Many of the youngsters imported into brand-name schools cannot cope academically with the pace or level they encounter at these schools. Hence, a great majority pass through the school oblivious to, and unable to grasp, the opportunity given by their exposure to this scarce academic resource. This is, indeed, a most inefficient use of our very scarce academic resources - our high schools. Had they stayed at their origin school, where there are experts in remedial work and expertise in other areas related to slow learners, they would have excelled at sports and be much better rounded individuals.

Our high schools must stop using these youngsters just to win. We must work with those the system allocates to us and focus more on whole education, i.e. developing all the intelligences of our children - artistic, dramatic, musical, sports, etc. Academics and other talents are not mutually exclusive.

Let the shackles imposed by the dictates of the win-at-all-cost and the-ends-justify-the-means approaches be loosened, so that we may act in keeping with the best interests of all our children. Let us not use them, motivated by other interests.