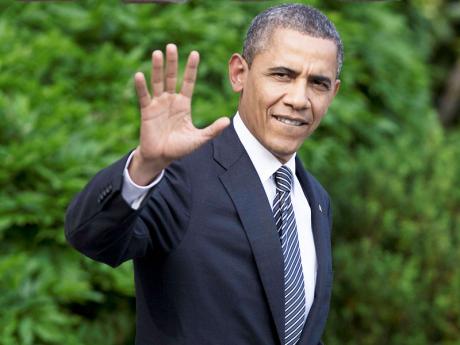 Many believe US President Barack Obama is making a big gamble on gay marriage in an election year. -AP

God's creation of the world makes it very clear. He is the Lord and God of all the world. He made all things with a definite order and purpose.

There is an order to the universe. We are called to cooperate with that balance inherent in creation.

Because of sin, we are deviant. All of humanity is plagued by wayward desires because of concupiscence, a tendency to wrongdoing. There is a tendency in all of us to break the natural law of God, whether out of rebelliousness, curiosity, arrogance or the desire not to know evil. We tend to deviate from his inherent plan.

For instance, males possess a male body with a male soul; women possess a female body which issues from a female soul, implanted by God.

This is the same for all creation: plants cannot be other than their genus and species; animals likewise. There is a distinct life force within each object implanted by the Lord; a 'principle of life' which makes all different: the physical reality or make-up being the statement of what is that principle of life.

When we make over a man to be a woman, or a woman to be a man, we destroy the plan of God - that leads to total confusion. We must remember that "the law of God is written in the hearts of men" and, indeed, all of creation. Those who do not obey the law of God will be condemned. Much more, those who lead others astray: "A millstone will be tied around their necks and they will be drowned in the sea."

When these deviate from the plan of God, they create confusion. Satan is the author of confusion and lies. He hates the world, he hates all people. As Satan was condemned, he wants us and the world God created to be condemned by God. The Lord made the earth, but He will destroy it if we disobey him. "If you love me, you will keep my commandments." But He will raise it up in three days.

The rulers of the world today are obsessed by money, power, popularity and pleasure. They will do anything to be in positions of power that fill their desire for attention. They will contravene the law of God by feeding the world with what the fleshly world wants: the pride of life, sex, and the adulation of the world. Popularity and acclamation are their deepest desires in life.

Like Satan, they desire to be adored, worshipped, honoured and glorified. Thus, they will challenge God's authority to command and require morals from His people. All they want is popularity, position, power, which come from the people, no matter what is the cost. These so-called leaders are blinded by pride and the love of the world. But finally truth will win out, the Lord will have justice on the last day. It is either hell or heaven for each of us.

The social agenda is very clear for those who want power, as set out by the European Union and USAID. They believe that to better the world, it is best to cast out all moral and ethical values, most of all Christian values. As for Islam, they have decided the best is to woo them with money and friendship. These world leaders think that once morality is cast out, the door will be open for greater sales for all their goods, especially what is slack and vulgar. It will be open season to the market with the paraphernalia of a hedonistic and pagan life, produced and marketed by a vulgarised Europe and America.

The social agenda plotted out by Satan and his many collaborators is very clear:

1) A contraceptive world for all and the liberalisation of sex for all, including children;

2) The marketing of abortion;

3) The marketing of homosexual practices;

4) The pursuit of wealth, pleasure and good times without limit;

5) The elimination of the elderly;

6) The survival of the fittest;

7) The destruction of the poor and the weak;

8) The conquest of God and godly people;

9) The launching of a world without Christian morals and ethics;

10) The result of all the above will bring a world of selfishness, suicide, unhappiness, self-destruction and, finally, the end of the world.

And so, we would have created self-hatred, ugliness, hell on earth, and needless to say, the punishment of hell in the afterlife.

Jamaica is a Christian country. It is being eroded by false prophets or those who pretend to be Christian for the sake of politics or position. Driven by blind ego, they are also blind guides. Always with the rhetoric of sympathy for the poor woman (feminism; therefore, abort the child); or the legalisation of homosexuality (poor lonely woman or man); or euthanasia (sympathy for those who suffer from sickness or old age).

But there is no acknowledgement of the truth that all these activities are against the law of God and have, as their origin, a pagan and hedonistic desire for money and pleasure.

"They exchanged the truth of God for a lie. They are senseless, faithless, heartless, ruthless. Although they know the just decree of God that all who practise such things deserve death, they not only do them but give approval to those who practise them."

Satan is the author of all this deceit and rebellious activity. He makes every evil or wrong seem good, attractive, desirable, soft, even kind and beneficial - but which leads to self-hatred and to the destruction of the human person and soul.

I have set out the moral-ethical problems now facing the world. Do you dare to stand out and say what is right and what is wrong in accordance with God's plan, or, will it be the way of the world, which hopefully will not be your way?

Father Richard Ho Lung is founder of the Missionaries of the Poor. Email feedback to columns@gleanerjm.com.