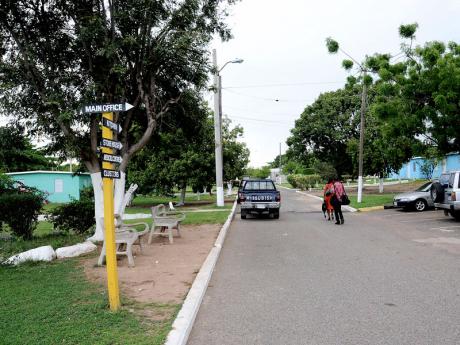 A section of the Golden Age Home in St Andrew.-Winston Sill/Freelance Photographer

The administrators of The Golden Age Home in St Andrew are considering a proposal to build a room where patients can have privacy for consensual sex.

Currently, there are concerns about the measures in place for consenting adults to have sex at the state-run facility.

There are also questions about practices employed by the practical nurses to help a few residents satisfy their sexual urges.

Adams-Thomas told The Sunday Gleaner that she raised the matter at a recent board meeting and the plan is to ultimately designate an area for sexual activity.

"What we are trying to do later on is create a specific space. It is not where it ought to be, but management plans to get it there," she said.

During a follow-up visit to the Golden Age Home one year after an exposé showed several flaws in its operation, The Sunday Gleaner's news team was told that some of the residents are sexually active, and staff members, in a bid to facilitate the pleasure-seeking residents, room male and female residents together at nights.

However, the rooms are shared by multiple individuals.

"You have a lot of them who are sexually active, and you have to facilitate that process," said Adams-Thomas.

She added: "There is not a designated area (for sex). What we try to do is facilitate it as best as possible. So, let us say you have a room and we know that you and you like each other, for example, we would put you and you in there, but the other people in there are visually impaired. They might hear something but they cannot see."

Quizzed about whether the practice was appropriate, the general manager said: "The fact of the matter is that they have the freedom, they have the right, even though they are old, to cohabit to some extent, and then the convention on the rights of the older person that is in the process of being instigated is really allowing them more freedom.

"The health care assistants at nights try as best to facilitate that. But, the ones who can move around they go elsewhere and do their thing on the property," she pointed out.

While the workers try to facilitate sexual activity between residents, the home does not dispense condoms to them.

Adams-Thomas does not believe dispensing condoms would be a problem, but she claimed there is no need for it as the residents go out and get their own.

"I don't think that would be a problem because it is not a prison and not a school," she reasoned.

Adams-Thomas also pointed out that in recent times the home has seen a dip in the average age of the people seeking refuge under its roof.

Meanwhile, during our recent visit to the government-owned home that was established to provide residential care for indigent people in the twin parishes of Kingston and St Andrew, a mentally challenged male resident was seen in a long, flowing dress that had a zipper in the back.

However, she conceded that the practice concerned her when she first arrived at the home.

"So even though he is in a dress and it doesn't look appropriate," said the general manager, it has been allowed to continue.

Delfreda Cammock Thorpe, operations manager, said it was necessary to put a dress on the mentally challenged man because it makes it "a lot easier" for him to stimulate himself and there is "no crying at nights".

According to Adams-Thomas, if the practical nurses put him in a pair of pants the mentally challenged man would destroy it.

"He will rip the zip and tear out the crotch (of the pants) completely," she said.

The man our news team saw in the dress is not the only male resident at the home that is given a dress to wear.

"There are at least two or three persons like that, who you have to put the dress on in the afternoon to facilitate the process," said the general manager.