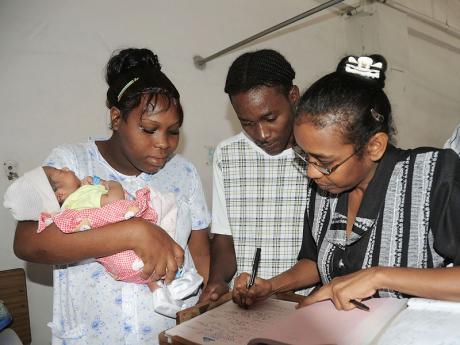 Beverly Roe (right) registration assistant at the Registrar General's Department, takes the neccessary information for baby Shacquan Shaquaine Hibbert who is held by his mother Julian Harmonious while his father Clayton Hibbert looks on. 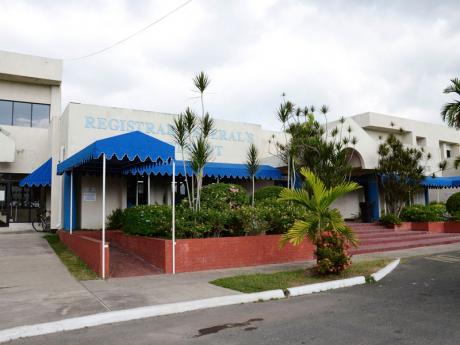 The Registrar General's Department (RGD), the country's keeper of births and death, is boasting significant success in its express service for birth certificates.

According to the RGD, it is now in a position to respond to 80 per cent of all online requests within 24 hours.

Acting chief executive officer of the RGD, Yvette Scott, said the express service is being used by Jamaicans locally and in the diaspora.

"This online service gives the opportunity to our customers in Jamaica and the diaspora access to our services," the RGD said in response to Sunday Gleaner queries.

A test of the online express service of the RGD last week showed one person applying for her birth certificate near 7 p.m. on Tuesday, May 8.

The cost of the service is $2,300 for the first copy of the birth certificate and a nominal fee for additional copies. Completed requests can be collected at various branches in the island or delivered at home.

By 8 a.m. Friday, May 11, the birth service was delivered at the applicant's home address in Kingston.

In another instance, an applicant who used the online express service received his request in two days although the service said it would have been delivered in three days.

According to the RGD's acting head, the requests are completed within a day or two and delivery starts very early on the third day.

She said the service is not only popular, it is also profitable. However, earning figures were not immediately available.

"In terms of profitability, express service is one of the most profitable service offered to the public," said Scott, adding that, "a specialised E-Business Unit is in operation to facilitate our online customers."

According to Scott, approximately 99 per cent of emails and queries submitted to the RGD are responded to within 24 hours and more than 80 per cent of all applications submitted are satisfied.

"This gives information about the status of your application," said the RGD.

The agency said same day service is no longer in place, but the department "has always tried to facilitate urgent cases".

"Same day service was introduced by the RGD on July 18, 1997 and had to come to a premature end because of the significant cost and high demand this service required. As a result, we introduced the next day service...," said Scott.

Despite the success, complaints still linger about long delays by some customers of the RGD.

But the acting CEO defended the agency saying that although applicants are making fewer errors, which is one of the major reasons for delays, other issues provide challenges to the agency.

"Some of the reasons include, the name on a child's birth certificate is different from the name known to child, as his or her pet name was used throughout his/her life, such as at school and in the community."

The RGD also pointed to fraudulent entry numbers, unregistered births, no names or no last name on record, and errors made at the time of registration as some of the issues which lead to delays in its response time.

Scott said where these problems exist amendment of the customer's record must be made through a service known as 'Record Updating' but this cannot be done online.

"Yes, we have seen significant decreases over the years, which is due to the intense public education and community outreaches employed by the RGD. Additionally, with the introduction of bedside registration on January 1, 2007 this has also decreased errors at the time of registration," she said.

The RGD has employed registration officers at all public and private hospitals and birthing centres.

Under Holness the RGD was transformed into an executive agency and has expanded significantly.

It has nine branch offices, certificates are now issued on security paper, and the introduction of non-core services such as registry weddings and drafting of deed poll.