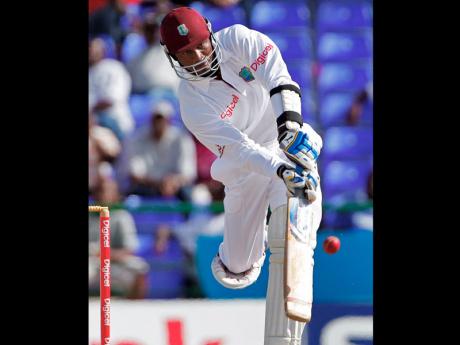 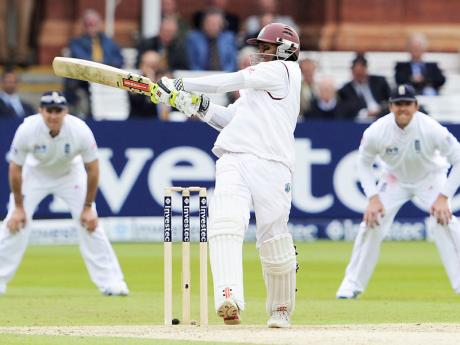 Cruising at 36 without loss in their second innings after conceding a first innings deficit of 155, West Indies lost three wickets for no runs off nine deliveries, to stumble to the tea break on 36 for three, with an implosion seemingly on the cards.

At the close of the third day, however, West Indies were staging a fightback on 120 for four, courtesy of another mammoth effort from veteran left-hander Shiv Chanderpaul who was unbeaten on 34 and Marlon Samuels on 26.

The pair have so far added 55 for the fifth wicket to prevent the tourists' further decline but West Indies are still 35 runs shy of making England bat again and require a Herculean performance on today's fourth day to avoid defeat.

Earlier, West Indies produced a clinical display to dismiss England for 398, after the hosts resumed the day on 259 for three.

Skipper Andrew Strauss, unbeaten on 121 overnight, added only one while Ian Bell converted his five into 61 and Graeme Swann belted a cameo 30 from 25 balls.

Adrian Barath and Kieran Powell then gave West Indies a solid start against a pumped up England seam-attack before chaos unfolded.

The right-handed Barath stroked 24 with four fours off 42 balls, including two searing off-side drives, and looked to be in full control of his innings.

Dropped on three by Tim Bresnan at slip off seamer Stuart Broad, Barath was first to fall when he edged a defensive prod at a delivery from seamer Bresnan that left him giving wicketkeeper Matt Prior a regulation catch.

Powell, reprieved by a review after he was given out caught behind off Jimmy Anderson on seven, added just one before following his opening partner four balls later, pulling Broad to Bell at deep square leg.

Vice-captain Kirk Edwards then completed an unflattering start to his experience in England when he departed without scoring to the first ball of the next over, run out in another calamitous mix up.

Darren Bravo played the first ball he faced square on the off-side and set off for a single but changed his mind with Edwards midway down the pitch.

Edwards made a desperate attempt to reach safe ground but failed to beat Jonny Bairstow's direct hit from point.

The quick dismissals left the Windies in turmoil and it forced Bravo and Chanderpaul to rebuild after the interval, sedately putting together 29 for the fourth wicket.

Bravo had gathered 21 from 57 balls in 70 pensive minutes at the crease when he misjudged a Swann arm-ball, offered no shot and watched as the delivery hit the top of off-stump at the start of the final hour.

Once again, Chanderpaul was pressed into crisis mode and as usual responded with another unflappable innings laced with concentration, so far batting an hour-and-a-half, facing 95 balls and striking four fours.

Samuels, meanwhile, has hardly played a false stroke in 88 minutes at the crease, and has counted four fours off 65 balls.

Chanderpaul had one anxious moment when England reviewed an unsuccessful lbw shout off Bresnan with the batsman on 22. However, the Guyanese responded with consecutive boundaries off the next two deliveries, the second of which raised the 50 partnership.

West Indies had earlier bowled outstandingly in the morning session to grab four wickets for 87 runs and set England back at 341 for seven at lunch.

Roach, in particular, was on song and claimed the first two wickets to fall. He had Strauss in just the fourth over of the day, caught behind on review after the left-hander was initially given not out by umpire Marais Erasmus at 266 for four.

He then removed debutant Jonny Bairstow for 16 after the right-hander missed a drive and was trapped in front.

Gabriel joined in the act, comprehensively bowling Matt Prior for 19 at 320 for six and in the next over with just three runs added, Sammy claimed Bresnan without scoring, caught behind as the batsman flirted with one back of a length.

England then lost Broad to the third ball after lunch when the all-rounder was bowled off the first ball he faced without adding to his 10, as fast bowler Fidel Edwards picked up his first wicket.

However, Bell and Swann came together to frustrate West Indies in a 55-run, ninth wicket stand as they gathered precious runs at the death.

Bell faced 105 balls in just over three hours at the crease and struck four fours while Swann hammered six fours in half-hour.

Once Swann's entertainment came to an end when he was bowled by Gabriel at 397 for nine, Bell followed with just one run added, pulling the Trinidadian to Powell at deep square.