Don Wehby - a friend of cricket 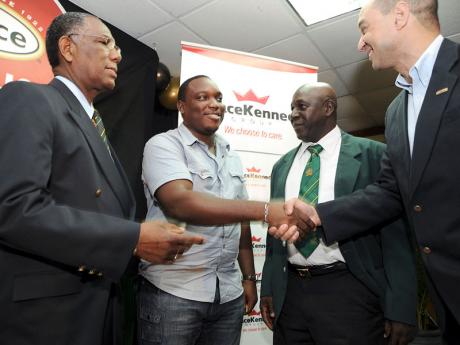 Jamaica's cricket has long been in need of a friend. In fact, as far as calling a spade a spade and pinpointing some of the shortcomings of the game, as far as putting some money into the game is concerned, it is badly in need of a very, very good friend.

Jamaica's cricket has been in need of someone for some time now who is kind enough, or who sees the benefit, business-wise, of investing some money into the game so that at the Jamaica Cricket Association (JCA) can restructure the competitive side of the game to the real and greater glory of Jamaica's cricket - to the former glory of West Indies cricket.

Fortunately for Jamaica, cricket seems to have found someone in the person of Don Wehby, the young, dynamic CEO of GraceKennedy, former senator and businessman, who, time and time again, almost every time he stands before a microphone, speaks about the game, about his time watching the game, about some memorable moments, about his heroes in the game, about what is happening to the game, and about what can be done to restore it to its once great days.

passionate about the game

And he just does not speak in ordinary tones as if simply to say something: he speaks passionately about the game which suggests that he really loves the game.

The last time he did this was a couple of weeks ago at a luncheon to honour Jamaica's record-equalling cricket team in the regional tournament when, for the umpteenth time, he lamented the state of the game in Jamaica and in the West Indies, tried to find the reasons for it, and also attempted to find solutions.

There is one difference between Wehby, and sports-loving Prime Minister (PM) Portia Simpson-Miller, who expressed the same sentiments a few months ago at the JCA's award dinner, and a few others and the majority of Jamaicans with the ability to change things.

The difference is that Wehby, like the PM and the few others, does not only talk about the poor state of the game: he is also willing to do something about it.

Wehby, whose company sponsors the all-important secondary schoolboy cricket competitions throughout the island, like the PM and the few others, knows what cricket, before track and field, boxing, and netball, has contributed to the national psyche, and he knows what cricket and one like George Headley have done for Jamaica.

He also knows the good things that cricket, like every sport, teaches people, and he does not want future generations of Jamaicans to forget those days and to miss out on basking in the glory of those days. Neither does he want the people of Jamaica missing out on one opportunity to become great, and he does not want them losing the chance of learning some important lessons of life by not playing the game.

Cricket is still one of the games which, apart from the benefit of physical exercise which it provides, teaches self-esteem, social skills, how to lead, how to handle disappointments, how to deal with winning as well as losing, and how to set goals.

According to Wehby, cricket needs help, and it needs help to rekindle interest in the game, to find some money for the players in the game, and to find more money to keep the clubs alive.

According to Wehby, businesses, like Grace Kennedy, should help the players in an adopt-a-player programme, they should help the clubs by sponsoring a club, and that would be great.

The proposal for the adopt-a-player programme is for players between the ages of 20 and 24 so that they can train and practise in an atmosphere of relative comfort.

That, however, would not be so great for cricket, and for many reasons.

The second most obvious reason is that it would be difficult to select the national team.

The national team, probably, would be compromised between the selection of those who are compensated financially and those who perform.

The best way in this day and age to rekindle interest in the game is for the young players to see affluence, to see the senior players doing well economically and feeling that they can achieve something from playing the game.

For years now, those in the clubs have been calling on the business sector to get involved with the clubs, and to their credit, sometime in the 1980s they did get involved but in a small way.

If Wehby can convince his friends in the business community to get involved with the clubs in a meaningful manner that would be great for the game.

It would also mean, probably, that the better players in the clubs would get some financial compensation which would solve the adopt-a-player issue.

JCA on the wrong path

With all the efforts of Wehby, however, with all the promise of Prime Minister Portia Simpson-Miller, and with all the help of those who love cricket, things will never change from the present state until the JCA accept that it is on the wrong path and that it must change its course.

There is a saying in Jamaica that too many cooks spoil the broth and that is exactly what is happening with the top competition in Jamaica.

Almost every time that the leadership of the JCA changes, the structure of Jamaica's cricket changes, and instead of making it popular, or more popular, the changes make it poorer.

The poor spectator support is the result of the standard of cricket and the absence of great players.

Once upon a time there were eight teams in Jamaica's senior cricket competition. This year there are 28 teams in the Senior Cup, more than the English County Championship, and the island is not bigger, it has not seriously increased its population, and the standard of play has not improved over the past few years.

The JCA must be strong, it must stand up in the interest of the game, and it must separate the sheep from the goat. Teams which are dismissed regularly for low and embarrassing scores and lose two-day matches in one day, teams which, for example, lose a match by an innings after the opposing team, another weak team, totalled only 99 have no right in the island's top competition.

The present situation of 28 teams, however, is madness, and it is madness especially when the JCA cannot afford to run a proper competition, a competition that will assist development of the country's cricket.

Regardless of Wehby's success, regardless of a friend getting the help of more friends of cricket for Jamaica's cricket, regardless of the Prime Minister's support, and regardless of money coming into the game to help the clubs and the players, cricket will not change until the JCA changes the way it does things.