Monday Talk with Michelle English - Going with the Jamaican Flow 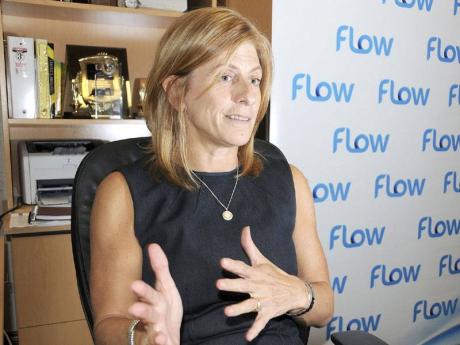 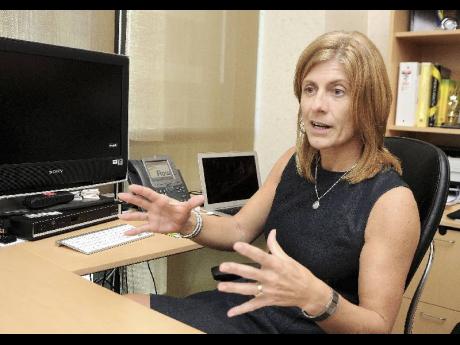 A blonde bundle of energy all but whizzed into the office as we settled down at Flow's New Kingston head offices. A firm handshake and a bright musical 'hello' later, Michele English was whirling into her seat while flashing her tresses into place.

"Hope we can get this through within the hour. I have a flight to catch. ... That's how it is with me always trying to squeeze some more out of the day," she clipped cheerily in her Newfoundland (Canada) accent.

Indeed, that is not the only instance where Michele asks for more. Those that work with her will say without rancour that she is a tough taskmaster when the need arises, always asking for the best out of those she leads.

"I'm about results ... . I like to have people who are better than I am at what they do, then I expect them to deliver. I ask them what they're gonna do and when they say that, I just ask when. I don't wanna tell them how, but they must deliver."

This matter of demanding a lot and delivering at a high level has been a way of life for Michele and she attributes this to the influence of her parents.

This would lead one to wonder if this didn't bring out the rebel in the young Michele.

That talk set Michele on a path to success. It was about that time that she declared she would one day be a CEO, eliciting a 'yeah, rrright' from one of her parents. Look at her now.

Michele wears her 20 years' experience in the tough telecoms industry well. Lesser mortals show battle scars, a large chip on their shoulder and a testosterone soaked attitude. Michele is cheerful charm with just a necessary hint of an iron fist in a velvet glove. Fresh out of the University of Newfoundland with her B Comm and MBA, there were worlds to conquer. First stop was the Newfoundland Workers Compensation Commission.

"I was senior director, dealing with personnel matters. I liked it but I kept wondering if I could do more."

That 'more' was to come almost serendipitously.

"I was doing personnel matters at Persona Communications Corporation and my boss came in one day and said the general manager was leaving. So I started to talk about the adjustments needed and stuff when he said, 'And I've already decided who should take over ... . You'."

Michele relived the moment of surprise and motioned how they must have both looked at her very visible six months' pregnancy.

"That is when I really found my purpose because I was no longer dealing with just advising somebody and stuff like that. Now I was making decisions, really being a part of the action."

Michele led the rebuild of Persona's network to deploy digital cable television and broadband Internet services in her region. Joining Flow since 2005 has just meant transferring all of that technology and experience to the Jamaican environment, only with tougher competition.

"It's a really exciting time to be with Flow in Jamaic a ... we're starting from scratch and really making significant changes."

Those significant changes are part of a work in progress for the "Jamadian" (she and husband Doug and their 12-year-old now call Jamaica home).

"It's funny, when I go to Canada and I say I'm going home, I mean Jamaica ... . I want to see Flow making a difference in the areas of health, national security and education ... . That for me is the sort of unfinished business."

Michele is all set to succeed. For her, it doesn't matter that she is in the tough male-dominated area of telecoms.

"Gender has never been an issue for me and 'the boys' have never made me feel that way," she says dismissively. Still she is constantly evaluating herself, realising that she does not know it all. She harks back to the time when one of her life coaches took her down two notches when she was behaving as if she knew it all.

"He (Derek Forsey) taught me humility ... a recognition that I don't know everything ... . He really, in a nice way, taught me about my strengths and weaknesses ... and one of the lessons I try to pass on to those I deal with is, if you think you know it all, think you can do everything, then you better start thinking again."

That sums up Michele English ... a tough boss in a very competitive environment who demands a lot and gives a lot in a cheerful way.