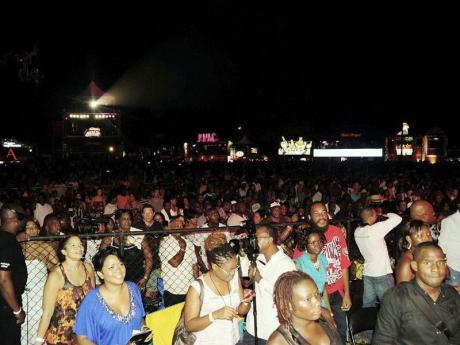 A fair-sized audience watches the performances at Reggae Sumfest on the International Night at the Catherine Hall Entertainment Complex in Montego Bay last year. - file

For this year's staging of Reggae Sumfest, the organisers will be celebrating two decades of doing the event, as well as Jamaica's 50th year of Independence.

For many years, Summerfest Productions has hosted Reggae Sumfest in Montego Bay and treated patrons to entertaining performances from top Jamaican and overseas acts. But when the event is held at Catherine Hall, Montego Bay, from July 19 to 21, Johnny Gourzong, Summerfest Productions' executive director, says it will have even more significance because of the 20th-year milestone.

"It will be very special for a number of reasons. It has been a long haul and very challenging, lots of blood, sweat and tears over the 20 years. Having said that, we still plan to be around for some more years," he said, noting that this year's theme is 'Looking Back, Striving Forward'.

"We always have to try and freshen up the event. It's a new audience and we have seen the audience change in front of our very eyes."

As part of celebrating the 20 years, Gourzong says a decision has been made to pay respect to reggae and dancehall acts who have made an impact in music. This will just be one aspect of a special show which he says is being planned.

Gourzong added that Reggae Sumfest is also an official Jamaica 50 event. He said the organisers have been in talks with the Jamaica 50 Secretariat and plans are already in place to transform Montego Bay during the week of the event. During that same week, he says Summerfest Productions will be hosting daytime concerts in Sam Sharpe Square, highlighting young and upcoming reggae acts from western Jamaica.

This year's staging will also mark the reintroduction of the Sound System Night, where tribute will be paid to sound systems and selectors who have made a mark in Jamaica's music industry.

Although he was reluctant to name the major acts who will be on show, he promised that 'big names' will be announced in the coming week.

"I am sure we always make sure that we go out and get the top acts. Acts who are popular, acts who can perform. Just listen out for it and I am sure you will be pleased," he said.

"We deliver a good product and people have responded to it. We present the who's who in reggae and dancehall music. There are not many artistes who have not graced the Sumfest stage over the years."

While the preparations leading up to the event have been challenging, he said patrons can expect more of what they have always got - a great show, parking, security and food.

"We continue to deliver and tweak it every year to make it a little bit better," Gourzong told The Gleaner.