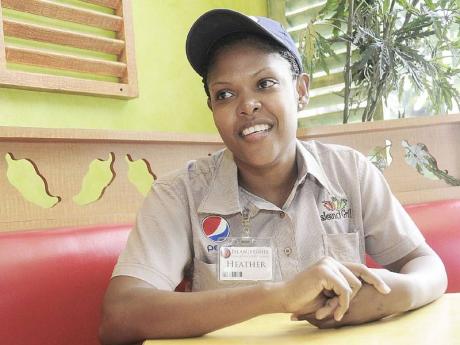 Heather sees her impairment as something to be challenged and defeated. 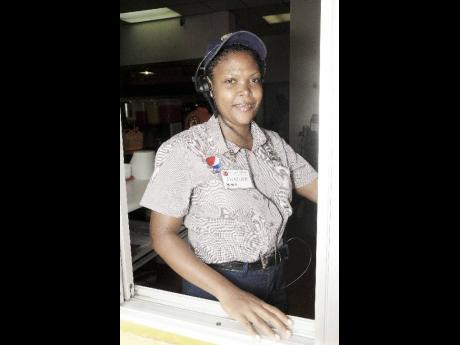 Heather sees her impairment as something to be challenged and defeated.
1
2

A smile greets you when you meet her. She looks and acts pretty normal. But after sharing a few words with her, you quickly recognise that this vivacious woman is not as fluent with her words. That is the result of her hearing defect.

Heather Powell is hearing-impaired and this has been her reality since birth. Though naturally it would have brought challenges, she was determined that she would exercise her true potential in any field she desires, even if hearing was an important asset for carrying out those duties.

A supervisor at Island Grill kitchens in the Boulevard Centre, Powell is responsible for 25 team members. According to restaurant manager Charmaine Spencer, Powell is not one to be taken advantage of. "She is really a strict supervisor. She is very keen and thorough and if something is not done properly, she is going to bring your attention to it. Sometimes you can't even go home until you address it."

Powell began working at the age of 18, doing general work at the then Char Grill Restaurant. "A friend told me and my mother that they needed someone there. So I dressed up neat and nice and went with my mother. When my mother told the man that I was deaf, he couldn't believe it."

Obviously leaving a positive impression, Powell started work the following day. She continued working there until Chicken Supreme (later rebranded as Island Grill) bought the restaurant in Twin Gates in 1991.

Powell has been with the Island Grill family for 14 years, a supervisor for 12.

Despite her impairment, Powell says the love for her job keeps her going. "I love Island Grill. I love looking out for my customers and I observe their body language when they wait too long. I don't like when the cashier line gets too long."

Powell is also an exceptional help for hearing-impaired customers who visit the location. "When they come and want to order, I do sign language."

Powell was born in St Elizabeth and told Flair that her impairment was not discovered until she was diagnosed by a doctor at age five. "I was going to a regular basic school and they used to just think I was quiet. My mother didn't really know either because I was living with my aunt. But then they realised that when they would call me I wouldn't respond, so they recognised that something was wrong."

Powell later relocated to Kingston with her mother where she was enrolled in schools for the deaf at both primary and secondary levels.

With the help of a hearing aid, she is able to communicate with her team members and garner their respect. "I treat them with respect and they do the same. They also listen to me when I talk. There are times when we joke around and I talk to them and advise them on things like saving."

Powell shares that her 11-year-old daughter, Fiona, wants to attend one of the top high schools in Kingston and she is giving her her full support.

When not at work, the supervisor says she enjoys doing hair, make-up and sewing. "I love to do those things, and when I sew I do curtains and cushions," she said.

And obviously a witness to her co-worker's skills, her superior, boasts at the wonderful work she creates with her hands.

As for persons who are born with a disability, Powell insists that with the right mindset and attitude, an impairment could just be a limitation that can be challenged and defeated.