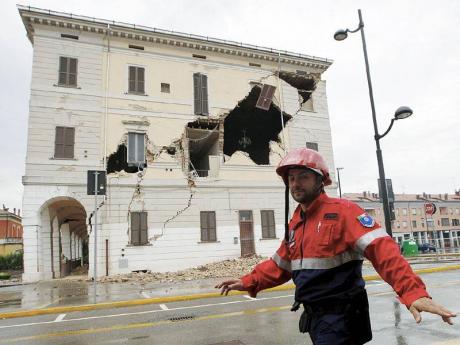 A strong earthquake shook northeast Italy early yesterday morning killing four people, tearing off chunks of church facades and sending panicked residents into the streets. Aftershocks wreaked more havoc in the region, including knocking down a clock tower and injuring a firefighter.

The magnitude-6.0 quake struck at 4:04 a.m., with its epicentre about 35 kilometres (22 miles) north of Bologna at a relatively shallow depth of 5 kilometres (3.2 miles), this according to the US Geological Survey.

Civil defence agency official Adriano Gumina described it as the worst quake to hit the region since the 1300s.

The four people killed were factory workers on the overnight shift when their buildings, in three separate locations, collapsed, agency chief Franco Gabrielli said. In addition, he said, two women died, apparently of heart attacks that may have been sparked by fear. Sky TG24 TV reported one of them was about 100 years old.

Dozens of people were believed to be injured.

The fear was palpable in Sant'Agostino. Resident Alberto Fiorini said there was "pandemonium" during the night.

"I took shelter under the bed and I prayed," he told Associated Press. His house was not damaged, he said.