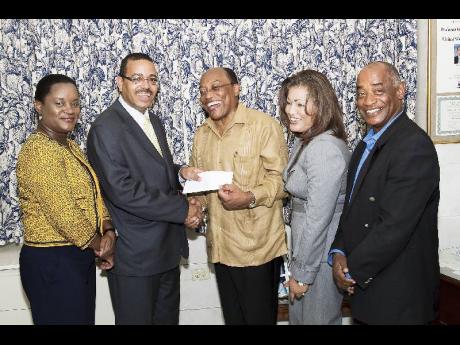 Jamaica was recently startled by the news that nearly 10,000 children under the age of 15 have diabetes. Junk food, too little exercise or physical activity resulting in obesity, are being blamed as the main culprits.

Both groups will be beneficiaries of a partnership between the CIBC FirstCaribbean International Bank and the Jamaica Diabetes Association (JDA) as the latter embarks on a comprehensive national programme of "empowerment, self-management and diabetes education".

The CIBC FirstCaribbean's injection of several millions of dollars to the JDA will facilitate the purchase of several machines including equipment for vision and haemoglobin testing, ECG machines to facilitate early detection of heart problems in adults and children and a Doppler machine for blood circulation screening, cholesterol and blood pressure machines.

The bank's support will also help the JDA to place greater emphasis on the care of children with diabetes, the training of persons and support groups in communities where they can be a sustainable resource.

Prevention, control and management of diabetes

Nigel Holness, managing director of CIBC FirstCaribbean International Bank, said that they were "supporting the work of the JDA towards prevention, control and management of diabetes of the Jamaican population".

The worldwide prediction is for a 55 per cent increase in the prevalence of the disease, but Morrison said that "the CIBC FirstCaribbean/ Jamaica Diabetes Association partnership will go a long way to staving off a pandemic in Jamaica".

He is banking on the programme of education to result the prevention, or at least early detection and treatment to control and reduce diabetes in Jamaica.

CIBC FirstCaribbean is the largest, regionally listed bank in the English and Dutch speaking Caribbean serving over 500,000 accounts in 17 markets, through 3,400 staff, across 100 branches and offices. The bank offers a full range of market-leading financial services in: corporate and investment banking, treasury sales and trading, retail banking, wealth management, small business and credit cards.